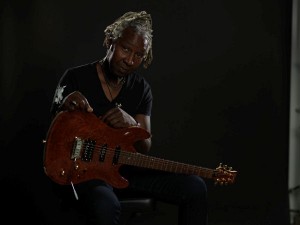 “Otherworldly”, “scorching”, “polyrhythmic” and “chilling” have all been used to describe Eddie Turner’s guitar playing. His ethereal style is an amalgam of the Afro-Cuban rhythms of his heritage and the music that influenced him as a teenager: Chicago blues, jazz, r&b and psychedelic rock. A multi-nominee for the Blues Music Awards with numerous highly praised recordings, Eddie “Devil Boy” Turner had toured as a member of the Otis Taylor Band prior to taking on his successful solo career, Eddie Turner & The Trouble Twins. “If anybody ever went down to the Crossroads and let the Devil tune his guitar it was probably Eddie Turner. Man, you get chills every time the guy strikes a note! And the expressions he makes while he’s talking out each lick leave one convinced he’s channelling other-worldly ancestral demi-gods.”

Eddie Turner makes a much too rare appearance in Portland on Thursday, December 11th, at Duff’s Garage for a 9:00 pm show. Duff’s Garage is located at 2530 NE 82nd.