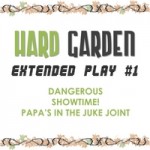 This is definitely something new for Son Jack Jr. and Michael Wilde, the duo who have represented the Northwest at the International Blues Challenge and twice made the semi-finals. From their past you’d expect them to be releasing more of that traditional Delta style music that has been their mainstay for so many years. But they’re taking a challenging new direction with a new trio format that includes Seattle’s jazz, blues and funk man Garrett Williams. The grouping is called Hard Garden and they’re exploring a more contemporary sound to the blues that encompasses electronic dance music, samples and looping, remindful of the Fat Possum releases from R.L. Burnside in many ways. There is a lot of funkiness on this 3-track EP and on the final number Son Jack lets loose with some vicious slide guitar. This is blues for a new generation. It might not be the right flavor for everybody, but it should appeal to younger audiences. A cool new approach and hopefully they’ll put out a full length recording soon. Big applause to Hard Garden for exploring new ground. Papa’s definitely in the juke joint here and he’s got his groove on.