You are here: Home1 / Cascade Blues Note2 / For a rockin’ night of music, go see the Mike Branch Band 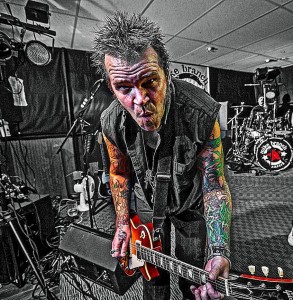 It’s a new year and time to get out and listen to some music. One of the acts to get you dancing the night away is the Mike Branch Band.

Mike is a native Portlander, who wandered for a bit to Reno, NV, to work as the slot manager at Circus Circus and then to South Florida to work on an all original band called BABY Simone. He moved back to the Pacific Northwest in 1999.

He has spent approximately the last 40 years playing music professionally, having played his first professional gigs at age 13.

In addition to playing music, Mike has been doing freelance graphic design, web design and marketing for the last 20+ years.  “My company is called Media Services, I work out of my house, preferably in my jammies,” he said.

Listening to Mike play, you can hear the host of rock influences in his music. “My playing style has been most greatly influenced by Billy F Gibbons of ZZ Top, Rick Nielsen of Cheap Trick and local guitar legend and dear friend, Jim Mesi.  Might as well throw in some Chuck Berry, Keith Richards (Stones) and Joe Perry (Aerosmith) while we’re at it.”

Those influences have helped shape the sound of The Mike Branch Band. In one word he describes it as, “BOMBASTIC!  We are a guitar-driven, rock and roll band that specializes in a classic rock sound geared to pack dance floors. BAM!”

This completely self taught guitar player describes himself as, “a guitar junkie.  I love guitars.  I like nice ones.  Expensive ones.  And after 40+ years I can still make one sound just as bad as the next.”

And if you haven’t figured it out, yet, this guy is a character. His list of awards includes: Spelling Bee, 4th grade. (I tried to verify this fact, but was unable to find any records still in existence from that time period.)

In addition to the spelling award, The Mike Branch Band was first runner up for their now semi legendary, fully animated video of their original song “Peel the Paint” on makeastar.com. The video can be found on the band’s website, www.mikebranchband.com.

The band is currently working on material for the first Mike Branch Band release.  Slated at this time to be an EP and scheduled for release hopefully sometime in 2014.  “Our intention is to record tracks at Nettleingham Audio which is a killer studio in Vancouver, WA and have the project co-produced by Kevin Nettleingham; who’s production track record is truly one of the finest in the city and speaks for itself,” Mike said.

When asked about his current bandmembers, he says, “I have an amazing band that, quite fortunately, shares my work ethic, goals and determination. Hard work doesn’t scare these cats.  The Mike Branch Band works more than any band on the local rock scene hands down.  In 2012 we worked approximately 80 dates.  In 2013 we worked over 100 dates.  New Years Eve 2013 was booked sine last February.  New Years Eve 2014 is already booked.  We already have close to 70 dates on our 2014 calendar and I fully expect that number to go over 100 before we’re done with the year.  My band mates are warriors!!”

Lead Vocals: Jeffrey Parrish.  “Jeff and I have played together off and on for somewhere around 30 or so years. He is a seasoned, veteran front man.”

Bass Guitar, Lead & Backing Vocals: Rojer Blaine. “Rojer has been with us for about 3 years now.  He has played in a number of local bands over the years and is exceptionally well respected.  He is the only musician in the city who has the distinction of having played on both KGON Homegrown albums back in the 70’s.  Rojer has toured the world including Canada, South Korea and Japan.”

Drums: Joe Fazzolari. “Joe is the new guy.  He’s a left handed drummer, which we have decided looks strangely weird and cool at the same time. Joe is officially with us for the long haul/duration since death is the only legitimate way out of the Mike Branch Band.”

“We are the only band in the city that travels with a dedicated light man (Lloyd Lee) and sound man (Doug McKenzie, formerly of Johnny Limbo fame among others) for EVERY show we do, large or small. Big club, little club; doesn’t matter, we take the boys with us. It guarantees a quality control at shows that is tough to beat. It costs us more money but is worth every penny and remains yet another thing that distinguishes us from the crowd,” Mike said.

“I am blessed to count myself as a member and be recognized as a huge supporter of the ENTIRE local music community; both musicians and venues. I enjoy promoting my friends right along with the Mike Branch Band.  I think it makes for a healthier music community and is in turn good for all of us. If venues do well, if my friends do well, then we all do well and the Mike Branch Band does well.  I like to think of the scene in its entirety as opposed to just my little slice of it. I get requests on a regular basis to consult with my peers on the subject of marketing and do so frequently.”

“I believe that much of our success comes down to marketing.  The Mike Branch Band is considered to have the best marketing in the city hands down.  This isn’t us saying it, this is what we hear from our peers and business associates,” Mike said.

“I am a second generation advertising brat.  My father had the largest ad agency in Portland for over 40 years.  I inherited his PT Barnum gene. Along with the graphic and web design skills and a reasonably savvy attack in the social media arena, we have been able to produce a large and loyal following that we refer to as the ‘FamClub—no fans, just family.’  We are proud of our marketing efforts and believe we are raising the promotional bar on the local scene.  We believe this will strengthen the entire scene.”

“A companion to our marketing efforts that allows us to be leaders in certain areas of promotion is our merchandising.  We have produced one of the largest merchandise catalogs in the city.  Everything from buttons, bumper stickers, key chains, custom jewelry, mugs and a huge variety of t-shirts and custom apparel, all heavily branded with the iconic Mike Branch Band logo.  When it comes to marketing, branding is king and we do it well.  We are able to do our swag because Rojer (the bass player) and his wife Linda do silk screening, embroidery and custom ad specialties through their company, Sew Fine Dezign.  If you can print on it, they can produce it.”

But aside from the marketing, promotions, etc., Mike knows what truly keeps the fans coming, the music. “Finally and maybe most importantly, we are sincerely humbled with gratitude by our growing success and consider ourselves extremely fortunate to be able to do what we love to do.  We never take that gift for granted.”

Visit the band’s website at www.mikebranchband.com for information about upcoming shows and to purchase some of the swag.

Modern Blues Hybrid Band G. Love & Special Sauce Hit the Crystal Ballroom-... Bring Your Sweetie (not required) and Dance Shoes to The Lehrer for the CBA’s...
Scroll to top