“Gabriel Cox is a true songwriter at heart, blending elements of blues, rock, pop, funk and soul…His performance at the Waterfront Blues Festival last year was rewarded with a nomination for CBA best ‘New Act’. His self-titled CD was also nominated for best ‘NW Recording’ of 2014. Expect great things from this rising talent, you’re gonna love him!” according to Cascade Blues Association President Greg Johnson. 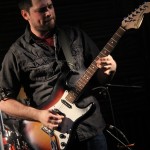 Gabriel was raised in Salem and has spent a lot of time performing up and down the Willamette Valley. Many of you enjoyed his sound at the December CBA holiday party. You may have seen him performing with other bands the past 10 years, but over the last year he has gone on to do his own thing, “It’s really exciting for me!” he said.

2014 was a busy year for Gabriel. Aside from playing the Waterfront Blues Festival, he also played a variety of festivals and competitions. At the Battle of the Bands at the Keizer Iris Festival last spring he took second place and won took the People’s Choice award. He also competed in the Journey to Memphis competition at The Lehrer in June. Other festivals included the Salem Art Fair & Festival, Bite & Brew of Salem, and The Bite of Oregon.

When asked about his musical ambitions, he said, “I’ve always wanted to play music professionally, but never really thought I had it in me. I was a pretty shy kid growing up. Music let’s me open up though.” After serving for five years in the Air Force, he returned to Salem and started his “day job” working for the State of Oregon for about five years, but says he would definitely rather play music full time.

Mostly he plays guitar and sings, but plays other instruments as well. He is self-taught, with no formal training. “But I come from a musical family where a lot of my relatives are also musicians, so their influences sort of pushed me toward music.”

“My musical influences mainly come from the people I’ve played with. The local music scene in the Portland area is very inspiring to be a part of.” He said he has loved blues from an early age and there are many blues artists that he has found influential over the years.

He says he plays with many talented musicians in the Portland area. “I’m always looking to play with other musicians—I can’t wait to see who I meet next. If anyone is interested please contact me. I try to mix up the musicians I play with so that each show has a new vibe. However, since the beginning, it’s been my dad, Mark Cox on drums; Sheldon Roy on bass guitar; Nathan Olsen on keys; and John Pulvers on guitar.”

Gabriel released his self-titled debut album in April of 2014. “My wife really pushed me to get it done for a long time because she knew how talented I was. The album turned out absolutely wonderful, and I’m so happy to share it with everyone. If you haven’t heard it yet you can order it off my website, www.gabrielcoxmusic.com, or find it on iTunes.” He is hoping to release more music in the future, so be on the lookout for that.

Gabriel is one of those performers who you’ll be glad to say, “I knew him when he was starting out on his own.” If you haven’t seen him in action, get out there and check it out. For more info and a list of upcoming shows, check out his website, www.gabrielcoxmusic.com.