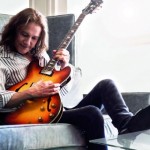 Guitar hero Robben Ford has always been a popular attraction whenever he plays in Portland. Over the years, Ford has worked with an impressive and varied collection of jazz, rock, and blues artists such as Charlie Musselwhite, Miles Davis, Joni Mitchell, Jimmy Witherspoon, George Harrison, Bonnie Raitt, Ruthie Foster, Barbara Streisand, Rickie Lee Jones, and Tom Scott while working on his own solo and family projects with his brothers. With his instantly identifiable, signature sound, Robben Ford continues to produce cutting edge performances whatever the musical genre, and with 35 recordings under his belt as both a solo musician and a supporting player, plus his five Grammy nominations, this is an artist of legendary caliber.

Robben Ford will return to Portland for one night only at The Aladdin Theater, 3017 SE Milwaukie Avenue, on Tuesday, June 2 for an 8:00 pm show. Tickets are $32.50 advance and $35.00 day of show and can be purchased at the Aladdin box office or through TicketFly.com. Those under 21 are permitted when accompanied by a parent or guardian.

The World Mourns The Loss of the King of the Blues, BB King 2015 Journey To Memphis Opening Round To Be Held Two Nights At The Lehrer-June...
Scroll to top