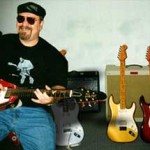 Kenny Blue Ray has a resume that would make many a guitarist envious. How many people can say that they have been a member of such bands as Little Charlie & The Nightcats and Marcia Ball, plus doing many sessions with artists like Stevie Ray Vaughan, Mitch Woods, William Clarke, Charlie Musselwhite and Tommy Castro among many more. With a deep, fat tones and fleet-fingered playing, Kenny Blue Ray makes it all look so easy and is one of the finest guitarists on the West Coast today.

Now calling Bend, Oregon home, Kenny Blue Ray will be coming to Portland for a show at Duff’s Garage with his good friends and Cascade Blues Association Hall of Fame members Kinzel & Hyde. Stu Kinzel and LynnAnn Hyde are the epitome of classic blues harmonica-guitar duos performing their original music alongside traditional numbers by greats like Muddy Waters, Little Walter, Slim Harpo and more, plus a little Cajun thrown into the mix.