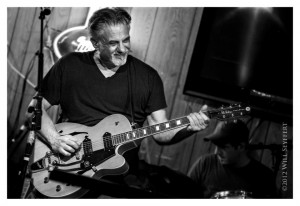 Pete Anderson photo by Will Seyffert

Pete Anderson is a multi-platinum, Grammy Award-winning Producer and groundbreaking guitarist, who melds blues and country to forge a style all his own. Known as a pioneer in the roots-rock genre and an early champion of the Americana movement, he has released 5 critically acclaimed solo records on his own label Little Dog Records with another one in the pipeline.

His performance has been described by LA Weekly as: “An earthy, felt, eloquent set of blues (and beyond) from guitar paragon Anderson. The maestro, as ever, does not disappoint.”

And Roughstock.com states: ” (Anderson is) someone whose name belongs with Clapton, Hendrix, Harrison, and Stevie Ray Vaughan… never pass up a chance to sit in a darkened room and watch Pete Anderson play guitar.”

Pete Anderson will be back at Duff’s Garage on Monday, November 18th for a 9:00 pm show. His last performance at Duff’s last July was highly praised and regarded as a not to miss show. Admission is $15.00.