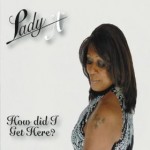 How Did I Get Here?
Self-Produced

For somebody who has spent their life in Seattle, Lady A sure has a lot of Southern feeling within her music. On her latest release How Did I Get Here? there is the gumbo-flavored essence of Louisiana and that deep-down soulful Mississippi blues. It can be quite reminiscent of the great music originating from the Malaco Records label. And her recent trips down South with the Delta Music Experience tours have left quite an impression on this artist that shows through with the songwriting that she shares in the selections with bandmates J. Oliver III and Paul Robertson. The only exceptions are “24 Carat Man” that she co-wrote with guest guitarist Teri Wilson and a cover of the Will Jennings/Nesbert Hooper classic “Never Make Your Move Too Soon” that she puts a funky spin on.

The opening track “My Kind Of Blues” is a soulful vocal number with very gritty bluesy guitar work by Dexter Allen. “How Did I Get Here” is another soul piece with outstanding keyboard backing from Paul Robertson. It is quite emotional, paying tribute to her late bass player Gary L. Smith. On the song “If Mama Ain’t Happy” there is a bit of zydeco flair and “Cabbage N Cornbread” could’ve been playing on your car radio back in the 80s as you drive through downtown Jackson, Mississippi, and “Nobody But You Lord” finds Lady A offering an a cappella gospel solo.

Throughout the song “Moan Instead Of Sing” various locations in Mississippi, specifically in Clarksdale, are called out. On the closing track, “My Future Ex-Huzbun” she reflects even further talking about food, places and people in the Mississippi city. This song is the real treat on the disc, recorded in Memphis’ Sun Studios with guitarist Super Chikan and drummer Cedric Burnside.

Overall, Lady A has put together an enjoyable album with How Did I Get Here? that showcases her different musical tastes, all of it funky, bluesy and soulful. Nicely produced with a feeling of the great soul music of the past ideally suited for today’s taste.