You are here: Home1 / PDX Blues Event2 / I Put a Spell on You – A Tribute to Nina Simone by The Adrian Martin...

She was one of the most extraordinary artists of the twentieth century, an icon of American music. She was the consummate musical storyteller, a griot, as she would come to learn, who used her remarkable talent to create a legacy of liberation, empowerment, passion, and love through a magnificent body of works that crossed over various genres including jazz, soul, gospel and the blues. She earned the moniker ‘High Priestess of Soul’ for she could weave a spell so seductive and hypnotic that the listener lost track of time and space as they became absorbed in the moment. She was who the world would come to know as Nina Simone. 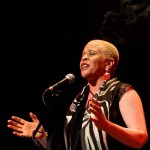 On March 19, Portland’s The Adrian Martin Sextet featuring powerhouse vocalist LaRhonda Steele will present a tribute to the late Nina Simone, “I Put A Spell On You,” at the Alberta Rose Theatre, 3000 NE Alberta Street. Guitarist Adrian Martin has performed with a variety of Portland-based blues and jazz artists as well as working on stages across the country. Joining Martin and Steele will be bassist Leah Hinchliff, drummer Mike Snyder, saxophonist Pete Petersen, and keyboardist Mark Steele.

Showtime for this tribute concert is 8:00 pm and it is open to all ages with minors under twenty-one being accompanied by a parent or legal guardian. Tickets can be purchased through AlbertaRoseTheatre.com for $20.00 advance or $24.00 at the door day of show.