With some people all you need to do is set them alone in a chair with a guitar and magic appears. So it seems with Ian Siegal, the British blues master who consistently is named one of the finest artists of the genre throughout Europe. Usually Siegal works with a band for his recordings and so when a solo release comes out it is certainly something to celebrate. Many fans had been clamoring for a new solo disc. Many more for a live album to capture the pure energy and guitar tenacity erupting from his strings onstage. So this new release, Man & Guitar delivers on both counts. 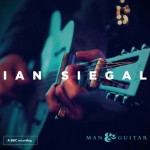 Recorded in London’s famed Royal Albert Hall in late 2013, it is everything you could hope for from Siegal. Running through his own ingenious originals alongside beautifully rendered covers, this live performance easily offers the guitar man at his best.

Selections for this live performance ranged from numbers from his most current release at the time The Dust, to his Blues Music Award nominated Candy Store Kid, to traditional blues by Son House, Charlie Patton and Fred McDowell,” to Texas troubadour Tom Russell and even a little 19th century Stephen Foster. All are done to perfection . . . well almost, the only time something is out of place is when Siegal tells us he goofed on the Charlie Patton’s “Pony Blues.” But as he states in the liner notes, “This is all the songs from start to finish imperfections and all.” But that is exactly what makes live performances unique and inspiring in the hands of the right person. Ian Siegal is such a person. His take on Taj Mahal’s arrangement of “T’ain’t Nobody’s Business” is every bit as lively and tongue-twisting as Taj’s, right down to his impersonation of Wolfman Jack.

Throughout it all the guitar work of Siegal is not only impressive, it is superb. If you have never heard Ian Siegal perform before, or may only be familiar with his electric band output, Man & Guitar is something to definitely seek out. He may come across as a diamond in the rough on stage, but this is a pure gem in all its polished finery. For what everybody in Great Britain may already know, it’s time for the rest of us to wake up too. Ian Siegal is a blues master.