You are here: Home1 / Cascade Blues Note2 / In Memory Of Jimmy Lloyd Rea 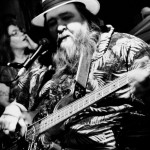 When it came to straight-ahead, pure blues, Jimmy Lloyd Rea would never think of playing anything else. And when he did play the blues, you just knew that it was going to have that strong boogie feel behind it. Bassist Jimmy Lloyd Rea was one of the most popular blues artists in the Pacific Northwest, but the devastation of diabetes cut a lot of his touring over the past few years following the amputation of a leg. But that did not stop him from continuing to lay down his sound and it even took him across the Pacific to play with friends in Australia at one point.

Raised in Eastern Oregon in Baker City, Jimmy Lloyd Rea made his mark in the blues world as a musician, songwriter and band leader of the fan favorite group Jimmy Lloyd Rea & The Switchmasters. The band featured a number of the Northwest’s premier players, including the likes of Bill Rhoades, Doug Rowell, Randy Lilya, Vince Hozier, Mike Moothart and Rev. Danny G. A member of the Cascade Blues Association’s Muddy Awards Hall of Fame, Rea also was a core member of the all-star blues group The Strat Daddies alongside stellar guitarists like Rowell, Jim Mesi, Robbie Laws, Terry Robb and Kenny “Blue” Ray. But his credentials ran even deeper, as a teenager in high school he played with Paul Revere & The Raiders and prior to forming his own stellar outfit, Rea was bassist and vocalist with the popular Pete Karnes Blooz

But Jimmy Lloyd Rea did not just work with Northwest artists. He had shared the stage along with world renowned acts like BB King, Albert King, John Lee Hooker, Freddie King,  Muddy Waters, Howlin’ Wolf, Big Walter Horton, Willie Dixon, Otis Rush, among many others. John Lee Hooker in fact referred to Rea as “The New Boogie Man.” And that was exactly what Jimmy Lloyd Rea was — A boogie man. His final recording was aptly titled, American Boogie Man. Jimmy Lloyd Rea was the authentic bluesman laying down the boogie in all of its shapes and forms. The real deal. He played nothing else and would never dream of straying from what he considered “real blues.”

Jimmy Lloyd Rea passed away on June 30 in a hospital in Nampa, Idaho. He was 63 years old. The Northwest lost one of their favorite sons that day. May he rest in peace and carry on that boogie beat in the hereafter.