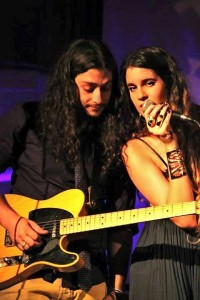 In a very short time this extremely talented band has gained international recognition and support by the international blues community and by an extended fan base, located in the USA, Holland, India, Germany and other countries all over the world. The first Israeli band to reach the semi-finals at the International Blues Challenge in Memphis in 2013 as well as out-selling every act at the IBC for CD sales, this band is all about energy and soul. Living in the United States the past year on a work visa, the band has been residing in Memphis and winning over audiences throughout the country as they make their first trip to the West Coast this fall. Led by the dynamic guitar playing of Ori Naftaly and the soulful voice of Eleanor Tsaig, their live performances are easy to see why they were chosen the Best Israeli Blues Act of 2013.

“This (‘I Feel Fine’) is what SRV might have sounded like if he had taken a more funk and jazz infused direction.” Barry Kerzner, American Blues Scene

The Ori Naftaly Band will be making their Portland debut on Tuesday, August 5th at Duff’s Garage, 2530 NE 82nd, for a 9:00 pm show. This is a Cascade Blues Association co-sponsored event. Bring your current membership cards to get a $1.00 discount on admission. You do not want to miss this one for one of the most exciting international blues bands working today!

Portland Mourns The Loss Of Bluesman Mel Solomon 2014 Groovin’ On The Grass Concert Features Superb Double Bill with the Robert...
Scroll to top