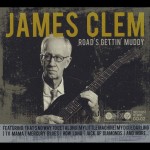 Last April, James Clem released a sensational recording of ukulele songs, Sugar Moon, that was outright fun and definitely a keeper for any lover of old time standards and blues from the first part of the previous century. Well, at the same time he was laying down those ukulele numbers, he was also pulling out his guitar every now and then. During those same sessions at Nettleingham Audio, Clem used the same core trio of himself, Ken West on mandolin and Craig Snazelle on bass, along with a multitude of good friends Mary Flower, Don Campbell, Ron Rogers, Fred Ingram, Jeff Masters, Darka Dusty, and Robert Burgeni, to provided us with yet another exceptional release with Road’s Gettin’ Muddy.

Once again recording live in the studio on analog tape, Clem covers a number of old-time blues from greats like KC Douglas, Sonny Boy Williamson, Rev. Robert Wilkins, Frank Stokes, and Little Walter for example, but he also takes on folk and country artists like Leadbelly and The Carter Family. While Clem gives us many familiar numbers, such as “Mercury Blues,” “Nobody’s Business,” and “TV Mama,” he also offers a little run of twanging surf guitar on his own original “Shadow Orbit.” There’s plenty to like on this disc, especially the duets with Mary Flower on the aforementioned Carter Family’s “My Dixie Darling” and the trade-off between the two on Lonnie Johnson’s “You Had Too Much.”

James Clem is not only an amazingly under-recognized guitarist and ukulele player, he is also a superb vocalist that carries these tracks on Road’s Gettin’ Muddy brilliantly with his rich sound. Paired with Ken West’s backup vocals (and mandolin work) the numbers are memorable and keep you coming back for repeated listens. Did I say repeated? In my own opinion, both Sugar Moon and Road’s Gettin’ Muddy are two of the finest releases by any artist in the Northwest this year. Northwest? I would put them up against anyone anywhere. They’re that good.