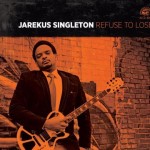 As a venue coordinator at the International Blues Challenge I am quite fortunate to see and meet some of the finest musicians that many people have not heard of yet. There are some amazing artists that do not make the finals; it’s simply the tastes of the judges they face on any given night. One of my favorite acts over the past few years has been Jarekus Singleton. He has been scheduled in my room three times and he continues to blow me away more and more with each performance. I know I am not alone when it comes to liking Jarekus. Word tends to roll down Beale Street about acts that stand out and the rooms fill for those receiving the best word of mouth. That has certainly been the case for Jarekus Singleton as every night seems to draw larger crowds to see this young man perform.

Obviously I am not the only one sharing this perception regarding Jarekus. Though he may have not reached the finals, he plucked perhaps the ripest berry of them all when it comes to capturing the right ear amongst the industry people on hand looking for new talent. That ear belonged to Bruce Iglauer, the head honcho at Alligator Records, who was drawn by the overall skills that Jarekus displayed. An outstanding guitarist with exceptional stage presence and a knack for writing deeply touching songs of experience and life’s ups and downs.

The title of Jarekus Singleton’s debut album for Alligator is Refuse To Lose. That title alone says a lot about this young man from Mississippi. His original hopes were to play basketball for a living. A star player at the University of Southern Mississippi, he suffered an injury that cruelly dashed those dreams. But he found the blues and it was a new outlet where he found a release for the pain and hardships of life. He has cried so many tears and suffered through the years, there are so many things he doesn’t understand, but he still refuses to lose. The lyrics of the song are delivered with intense guitar that sears to the soul.

The music can be hard rocking blues or deeply funky. It all has highly danceable rhythms, with strong backbeat from bass and drums and dynamic organ. But it’s the lyrics that truly say a lot. They’re sharp-witted and often biting to the bone. Bad relationships come across in the slow blues “Crime Scene,” not the type you see on TV and the victim is me. In another slow track he lets us know that he’s assured of going to Heaven, because his baby’s already took him through “Hell.” The descriptions used in this song are quite clever, his life was standing still and his heart was hard as a knuckle, or he calls his baby Stevie Ray Vaughan because she’s double trouble. In “High Minded” he stretches out on guitar as he tells you that a turtle can’t move if his neck ain’t out of his shell and this is not “Training Day” and my name ain’t Denzel. It’s the story of a self-possessed girlfriend who wants it all, but does not want to sacrifice anything. She wants to take a trip to someplace she’s never been, and Jarekus tells her how about to the kitchen then.

The pace slows down with a more simple stepping guitar with chunky harmonica on “Blame Game,” that just may be the finest track on this album of winning numbers. It is a light feeling piece, running around the theme of having burnt all his bridges, he just can’t win with anybody – his boss is a jerk because he got made when he fell asleep on the job; he asks if he can move in with a friend and he had the nerve to ask for rent; his girl loaned him some money and expects him to pay it back – well, you get the picture.

Jarekus Singleton has made his mark in the South and is now ready to let everybody elsewhere know just who he is. With a fine album like Refuse To Lose filled with exceptional guitar and all original crafty lyrics, there’s a lot to like. He should be set in the direction for quick recognition. I foresee a new blues star on the horizon. Check him out.