Joe Louis Walker has been delivering his mesmerizing guitar playing and songwriting skills for nearly three decades, reaping a staggering 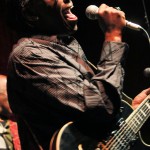 number of Blues Music Award nominations and wins over that time, including four nominations in 2013 alone. He was also inducted into the Blues Hall of Fame this past year. His music covers the blues in every angle imaginable over his career, whether it is greasy sliding guitar, smooth soul, Sunday morning gospel, funky grooves or a tenacious rockin’ approach as displayed on his newest Alligator Records release Hornet’s Nest, Walker can cover it all and do it perhaps better than just about anybody. His performances are legendary and always big draws in the Portland area with his incendiary guitar and enrapturing vocals.

It has been almost two years since Joe Louis Walker played last at Jimmy Mak’s, with only a lone appearance at the Waterfront Blues Festival thrown in between, so his return to Portland will be highly anticipated. He will be returning to Jimmy Mak’s, 221 NW 10th  as part of the Soul’d Out Music Festival, on Thursday, April 17th for one show only at 8:00 pm. Advanced tickets can be found at Tickettomato.com, $17.00 reserved seating and $13.00 general admission. This is a Cascade Blues Association co-sponsored event, and members may receive  a $1.00 discount when ordering on-line and using the code “CBA” or by showing their membership card at the door.