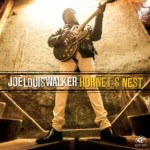 For me, Joe Louis Walker has been one of my all-time favorite blues musicians and I heavily anticipate every new release that he puts out. Over the years that has amassed to about twenty-five recordings and each of them always seems to put Walker into new dimensions within the music he addresses, always filled with extraordinary guitar and features those immediately identifiable vocals.

Hornet’s Nest is his second disc on Alligator Records, following up on the heels of the highly praised Hellfire. Once again he went to Nashville to create these new tracks, utilizing the talents of one of today’s best producers and songwriters Tom Hambridge who has worked his magic on so many top artists including Buddy Guy, Susan Tedeschi and James Cotton. A crack band behind him, Hambridge on drums, Reese Wynans on keyboards, Tommy MacDonald on bass and Rob McNelley on second guitar, lay down the foundation for one of Walker’s finest outings of his career.

Nine of the twelve offerings are original. Hambridge and Walker team up for crafty lyrical wordsmithing that are catchy, honest and true to Walker’s form of excellent material. These include tracks such as the title number “Hornet’s Nest” warning anybody who plans on catching the attention of his baby that they’re stepping into trouble and will definitely get stung by him; the hard rockin’ piece “Ramblin’ Soul,” “Not In Kansas Anymore,” “Stick A Fork In Me Baby” where he professes that his love for you is through as he states to “bring out the hot sauce and the A1, I’m handing you my notice, you ain’t getting this no more”; and the undying appeal for his lover in “Love Enough” as he will be true enough to “last until I lay down my soul.”

There are also some terrific covers included on “Hornet’s Nest,” as he takes on The Rolling Stones’ “Ride On, Baby” and “Don’t Let Go” which has been recorded in several different manners by people like Isaac Hayes, Roy Hamilton and Carl Perkins. Walker takes the number more in line with Perkins’ rockabilly fashion.

Guitar work always prevails on everything that Walker does. His trademark slide is prevalent on “I’m Gonna Walk Outside.” There is nice interplay between the guitar and Reese Wynans keys on “Soul City,” where Wynans comes across in a Sly Stone type of sound. And the slow blues of “As The Sun Goes Down” strikes at the heart with its emotional cry as he sings “when the sun goes down I ain’t nothing but alone.”

Walker started his career working in gospel with the Spiritual Corinthians and every now and then he will bring back that sound in his work. The closing piece on Hornet’s Nest is a beautiful original titled “Keep The Faith.” The vocals are touching, that may bring to mind artists like Bobby Womack or Donny Hathaway, with Wynans providing exceptional piano. It is the perfect ending to a sensational overall album.

Hornet’s Nest is a true testament to the diversity and ever fresh talents of Joe Louis Walker that seems to have no bounds. One of his finest albums of his career and exemplifies why he has been inducted into the Blues Hall of Fame. Extraordinary start to finish, Joe Louis Walker continues to amaze and inspire.