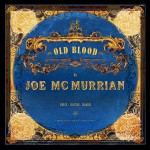 Joe McMurrian seems like a buried treasure here in Portland that we’ve kept to ourselves. One of the most inventive, innovative, creative and fresh sounding artists on the scene today, he should be a household name for anybody who enjoys listening to acoustic blues and roots music. There are very few people who have explored the sounds as deeply as he has. His music is modern, yet extremely influenced by the masters of the blues like Robert Pete Williams, Skip James, Lightnin’ Hopkins, Bukka White and Son House among many others. He channels those musicians in his own original compositions, yet this music does not mimic, it is highly pursuing new ground and laying the foundation for blues artists of the future.

Old Blood is Joe McMurrian’s first solo studio outing since his award winning Get Inside This House CD, that was recognized by The Blues Foundation as the Best Self-Produced CD in 2011. Studio recording did I say? Well, not exactly. Joe took to the out-of-the-way confines of an old pine cabin on Snow Mountain in Oregon and spent four days baring his soul and music by himself using vintage recording equipment, mics and instruments to collect a raw and natural feel to his songs. The wooden floor of the cabin helped enhance the sound on the tracks, most of which were completed in first takes.

With just his voice, guitars (both slide and finger-picked) and banjo, there is a lot of intimacy behind these selections. Every one is an in-depth story that requires close listening to grab the gist of Joe’s writing. But this music is so beautifully recorded and intensely crafted that it’s hard to do anything but let it capture your ears. And it goes in a variety of directions, often leaving you with the impression that the man has no boundaries. The only track on the disc that has been previously recorded is “Scrap Iron Pete” that was released in a live take on the Cascade Blues Association’s Puddletown Blues, Volume One. But that take was done with Joe’s band Woodbrain, and this solo outing adds so much more emotion and bares so much more with his banjo work.

What can be said about Joe McMurrian? His songwriting and performances stand on their own merit. He just does not release music that you’re going to hear from anybody else, and if you do, it is not going to match the quality and originality you’re going to find here. He has picked up right in step where he left off with Get Inside This House. Old Blood is more than just a great album, it is an acoustic masterpiece.

Old Blood is available as a download at http://joemcmurrian.bandcamp.com/album/old-blood.