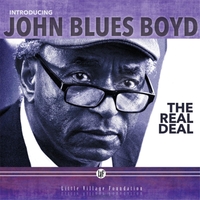 If you listen to just one new artist this year, you should direct your attention to John Blues Boyd. At the age of 71 he has released his debut disc with the urging and guidance of the Little Village Foundation.  Boyd claims that he always had a feeling for the blues, but life had to come first, making ends meet to cover his expenses. It wasn’t until his wife of 49 years, Dona Mae, passed away in 2014 after an extended illness, that Boyd was finally able to look into the blues — not only as a means of coping with his loss, but as a profession.

The album, appropriately titled Introducing John Blues Boyd: The Real Deal, was recorded in Kid Andersen’s Greaseland Studios in San Jose. There is a lot of autobiography behind the songs presented here. The album opens with a bit of retrospective on Boyd’s life, “I Am The Real Deal,” and the closing piece “John, The Blues Is Calling You” brings the events of his life up to date. The love for his wife and her suffering is documented in three tunes, “I’m So Weak Right Now,” “When Your Eyes Met Mine” and “Screaming In The Night.” A fourth number, written by Kid Andersen and Rick Estrin, is yet another tribute to her, titled “Dona Mae.” Of the songs included on the album, all but three were penned by Boyd. The only exceptions (aside from the already mentioned “Dona Mae”) were written by Rick Estrin, including an outstanding take on Estrin’s humorous “That’s Big!”

Every track on the album is pure blues that resonates with every note. The Real Deal is just that; blues played at its absolute best in traditional electric Chicago or Delta fashion. And having spent a great deal of his life living in Mississippi, the exposure was there. Not to mention his cousin was the late legendary bluesman Eddie Boyd.

Being released by Little Village Foundation, Boyd was accompanied in the studio by a gathering of the talented musicians that have become go-to artists for the group. They include such well-known blues greats as label leader Jim Pugh, Rick Estrin, Kid Andersen, Aki Kumar, Big Jon Atkinson, June Core, Terry Hanck, D’Mar Martin, Frankie Ramos, and Robert Welsh to name just a handful. Bringing John Blues Boyd into the studio is another prime example of the label’s drive to bring lesser known or overlooked musicians to the forefront. And we should all be happy that John Blues Boyd now has music that we can all hear! And from the sounds of it, we should be hearing a great deal more from this new 71-year-old artist as he has claimed in a recent article that he has already recorded 52 songs and has another 60 ready to lay down. This is without doubt, one of the best blues releases of the year! And though the term has been overused, mostly for people undeserving, John Blues Boyd truly is “The Real Deal.”

I Am The Real Deal / You Will Discover / I’m Like A Stranger To You / That’s Big! / The Smoking Pig / That Certain Boy / Dona Mae / I’m So Weak Right Now / When Your Eyes Met Mine / Screaming In The Night / (Have You Ever Been To) Marvin Gardens / Be Careful With Your Love / John, The Blues Is Calling You