You are here: Home1 / CD Review2 / John Mayall & The Bluesbreakers 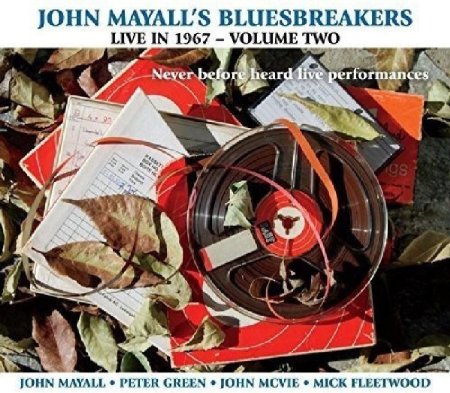 Live in ’67 — Volume Two
Forty Below Records
By Randy Murphy 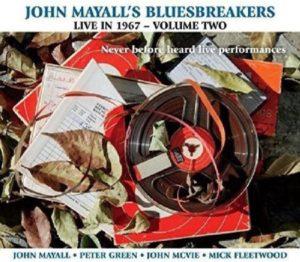 Last summer, I reviewed John Mayall’s new album chronicling a series of live dates in various London clubs during the spring of 1967. Now, Mayall and his pals at Forty Below Records have released, on honest-to-goodness vinyl no less, the next volume of these remarkable recordings.

To review how these historical performances came to light: Tom Huissen, a 16-year-old Dutch blues devotee, shadowed Mayall and this particular edition of The Bluesbreakers — Mayall on organ and vocals, John McVie on bass, Peter Green on guitar and vocals, and Mick Fleetwood on drums (and in this album, R&B singer Ronnie Jones sitting in on “Double Trouble”), around London during April and May of 1967 while toting his single-channel, reel-to-reel tape deck. Thankfully, Huissen captured on these priceless tapes a small taste of the nascent blues scene of mid-sixties Britain.

Just as the first release, these recordings are not close to high-fidelity, though to my ears this second volume on vinyl sounds a bit warmer than the first volume on CD — besides, listening to this music on a turntable, well, just feels right.

The performances Huissen captured here are invigorating and potent. While there’re no clunkers in the batch, there are a couple of soul-stirring highlights. The first cut, Mayall’s “Tears In My Eyes” showcases Peter Green’s ability to shift his guitar playing flawlessly from soulful into combustible in just a few short bars. “Greeny” a full-tilt, straight-ahead boogie number is another highlight, as is John McVie’s bass solo on “Chicago Line.”

But again, the whole album is terrific and it’s difficult to single out one or two tracks for recognition. It would also be quite difficult to underestimate the value of these recordings, and the only thing that overshadows their historical importance and cultural legacy is their musicality. Besides, how can blues tunes recorded in London’s Marquee Club or the Ram Jam in 1967 possibly go wrong?

So, my advice is to buy these albums, spend a few pleasant days listening to them, and then go see Mayall live at the Aladdin on November 7.

Ramblings On My Mind – October 2016
Scroll to top