You are here: Home1 / 2017 February2 / Jolie Clausen is Banging Buckets All Around Portland 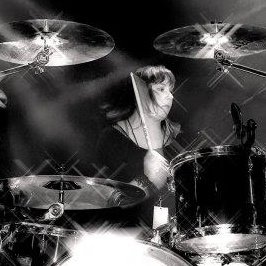 Who is that gal drumming that crazy beat? None other than the talented Jolie Clausen. Being a performer wasn’t exactly a plan for Jolie, it just sort of happened. “I never thought about growing up—I still don’t! I guess I just kept getting calls for gigs so I kept playing. I never sat down and thought, ‘Man, I’d really like to play some gigs.’ I was already doing that. I love performing and plan to do it forever!” she said.

She started playing with the Walla Walla Symphony when she was 14 and did all the musical theatre productions in town. She joined the Community College Jazz Band. “I also had a rock band then, we played at Frat parties at Whitman College.”

When discussing training, Jolie says she’s had both formal training and is partially self-taught. “I attended workshops in high school and studied privately on and off. I also studied with Mel Brown when I first moved to Portland. I graduated from the Mount Hood Community College music program. I still take lessons here and there from friends and drummers in town: Don Worth Jr., Ron Tuttle and Carlton Jackson. Reinhardt Melz, Brian Foxworth, Andy Gauthier and Cory Burden are other favorite local drummers who are always inspiring me and giving me tips of the trade.”

She plays with a variety of local bands which cover different genres of music. “When I play with Michelle DeCourcy and The Rocktarts its heavy rock, although we are currently working on some new originals that have a bit more of a southern swamp rock feel. With Bill Rhoades and the Party Kings and Queens we play traditional blues. With Malachi Graham it’s alt country.”

During the day Jolie works at a law firm downtown and has been doing that for about eight years. “It’s a great part-time gig that allows me to teach and play music. I teach private lessons at students’ homes and at Rhythm Traders here in Portland.”

When asked about musical influences, Jolie said, “What a big question?! When I sat behind a kit for the first time my teacher put headphones on me and cranked up “Misty Mountain Hop” by Led Zeppelin. I was so excited; I had never heard music like that before, so John Bonham definitely influenced me. I love all the jazz greats—Elvin Jones, Art Blakey, Roy Haynes… I also love Steve Gadd, Sly Dunbar, Fred Below, Levon Helm, Jim Keltner, Ginger Baker, Taylor Hawkins to Evelyn Glennie and Layne Redmond. Favorite drummers that I’ve met who just blew my mind—Billy Cobham, Gary Husband, Mark Schulman, Brian Blade, Gerald Heyward, and I recently met drummer and producer Butch Vig—What a cool guy?! They all have inspired me.

Jolie has performed on two CD’s: Broken Glass by Michelle DeCourcy and The Rocktarts (currently being played on Kink FM); and Silverado by Nervous Jenny Band. Additionally she’s working with songwriter Tom Holland in the next few months on a second Nervous Jenny album with producer Dean Baskerville. Malachi Graham Band and The Rocktarts have plans to get in the studio in 2017.

Legendary blues harmonica player Bill Rhoades called her in 2013 and they’ve been working together ever since. “What a fun band with Katie Angel on bass plus Newell C. Briggs and Chuck Laiti on dueling guitars.”

”I’ve been working with singer and songwriter Michelle DeCourcy for about two and a half years now along with guitarist Steve Adams and Mick ‘Lord’ Ramsdell on bass. I’ve also been working with guitarist and songwriter Tom Holland with Nervous Jenny Band for about two years now. I work with Americana singer/songwriter Malachi Graham and long-time friend and local guitar picking badass Jamie Stillway on upright bass, with Erin Elliot on backing vocals.”

“I am honored to be able to share a part of my musical life with the BluesNotes.” Keep an eye out for one of Jolie’s performances and experience her energy for yourself.