You are here: Home1 / Past PDX Blues Event 20132 / Josh Hoyer and The Shadowboxers Bringing Their Soulful Sounds To Portland-... 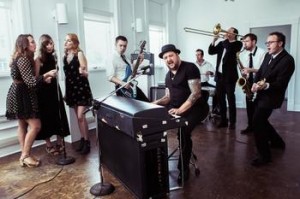 Fuse Recording’s Charlie Johnson describes Josh Hoyer and the Shadowboxers as “coming out firing on all cylinders, smashing styles together to come up with their own groove. Funky soul packed with power, it’s Dr. John meets Al Green backed by Booker T and the MGs. You know, the good stuff.”

Based in Lincoln, Nebraska, this band led by keyboardist/saxophonist/vocalist Josh Hoyer, is made up of a collection of stalwart veteran players who have worked with a number of renowned acts. Formed in 2012, they have been playing sold-out marquee venues and festivals throughout the West and Midwest. Borrowing  from the Stax. Motown, New Orleans and San Francisco sounds, they blend the classic sounds of soul and R&B while presenting their own unique presentation.  If great songs, soul-drenched vocals, screaming guitar, blasting horns, thick, nasty organ, and an inescapable groove are your thing, this band is for you.

Josh Hoyer and the Shadowboxers will be appearing at Duff’s Garage on Tuesday, November 18th, for a 8:30 pm show. Duff’s Garage is located at 2530 NE 82nd. This is a Cascade Blues Association co-sponsored event; show your current membership card at the door for a $1.00 discount on the $10.00 admission.