You are here: Home1 / Journey to Memphis2 / Journey To Memphis Finals

On July 4, the Cascade Blues Association held the finals for the Journey To Memphis competition at the Waterfront Blues Festival. Four acts had advanced to the finals from the first round held at The Lehrer in early June. They were Symplistic Soles, Beacon Street Titans, Sister Mercy and Bottleneck Blues Band. The four bands performed 25 minute sets in front of 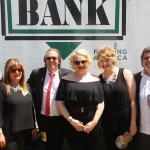 three judges, scored on blues content, instrumentation, vocals, originality and overall presence. When all the scores were tallied, the winners of this year’s competition was Sister Mercy, who will be the CBA’s representatives at The International Blues Challenge this coming January in Memphis. They will be joining Rogue Rage Duo, who will be representing the CBA as the solo/duo act. 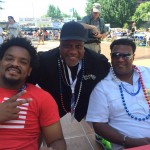 Judges this year were of a high caliber — like those who’d be found judging the finals in Memphis. They were former BB King and Bobby Bland drummer Tony Coleman, three-time IBC contestant, Alligator Records recording artist and Blues Music Award nominee Jarekus Singleton, and zydeco legend and Grammy winner Chubby Carrier. A huge thanks to CBA Vice President Wendy Schumer for finding our judges for both rounds of the Journey To Memphis.

Thanks also to the Journey To Memphis Waterfront Team: Wendy Schumer as Judges’ Assistant, Kate Naiman as Time Keeper, Cherie Robbins as Score Keeper and Greg Johnson as Host. Congratulations to Sister Mercy and thanks to all the acts who competed; the performances were all superb!

New Music To Note: August 2015Ramblings On My Mind-August 2015
Scroll to top