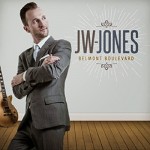 Ottawa bluesman JW-Jones has certainly been making his impression on the blues world for a number of years now, proving himself as one of Canada’s premier guitar players and entertainers. With a number of albums under his belt over the past fifteen years, as well as a wheelbarrow load of Maple Awards, he now debuts with blues powerhouse label Blind Pig for his latest, Belmont Boulevard, recorded in Nashville and co-produced by Tom Hambridge and himself.

There is plenty of blistering guitar work offered here. Jones soars through takes on Buddy Guy’s “What’s Inside Of You” and Bobby Parker’s “Watch Your Step,” and there are several songs written by Hambridge, who continuously shines himself as a songwriter and producer for many of the best musicians around. But it is Jones’ own material that really stands out for me. His instrumental “Magic West Side Boogie” will find it nearly impossible to keep still while listening to him tear through this piece filled with rip-roaring grooves in a near surf rock format. He also pays tribute to Texas guitar master and one of his personal heroes Jimmie Vaughan on “What Would Jimmie Do?”

Jones tackles social issues like domestic violence on “Don’t Be Ashamed,” then he relates how a love that had gone flat helped him free himself when she does him wrong by finding another man and all he can say is “Thank You.” The album closes out with a bit of psychedelic guitar roving on “Cocaine Boy” as Jones utilizes echo effects and fuzzy vocals to bring forth a hauntingly moody piece lasting a little more than seven minutes long.

Start to finish, Belmont Boulevard just simply blazes with sensational guitar work Count this amongst JW-Jones’ finest that should find many more accolades headed his way.

Love Times Ten / Watch Your Step / Blue Jean Jacket / Coming After Me / Don’t Be Ashamed / Thank You / Magic West Side Boogie / What Would Jimmie Do? / If It Feels This Good Tomorrow / What’s Inside Of You / Never Worth It / Cocaine Boy