Come join in the fun at the Kalama Music Festival on August 1 at Marine Park along the Columbia River in Kalama, Washington. This year’s event will include a varied selection of blues, R&B, reggae, rock, Motown — just a lot of good music. There will be food and a beer/wine garden and artists/craftspeople will also be showing their wares.

This year’s event will be headlined by Florida-based bluesman 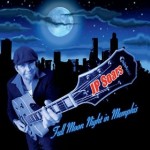 J.P. Soars & The Red Hots. Soars is a past winner of the International Blues Challenge and has received nominations for the Blues Music Awards under his own name and with the all-star band Southern Hospitality. His gravelly voice echoes Howlin’ Wolf, and his guitar and cigar box playing is in a league of its own.

Also on this year’s line-up will be Portland-based blues favorites Franco Paletta & The Stingers, with special guest

Oregon Music Hall of Fame member Terry Robb on guitar, the genre-crossing sounds of Ocean 503, which offers a diverse musical performance spanning R&B, reggae, funk, and blues, and Southwestern Washington’s blues band The Mojo Blasters. The music of Motown, R&B, and soul will be provided by The Elite, and hip rock, folk, and reggae tunes will be represented by Portland’s band The Sale.

A Cigar Box Guitar Raffle will also be held, offering a hand-made Cigar Box Guitar donated by headliner J.P. Soars, with all proceeds going to the Kalama Helping Hand. Tickets are one dollar, but you can get six for five dollars the day of the event.

The Kalama Music Festival takes place from noon until 9:00 pm, with entry only $10.00 and 2 cans of food. Marine Park is located at 110 West Marine Drive, in Kalama. Tickets may be purchased in advance at www.TicketTomato.com.