You are here: Home1 / Past PDX Blues Event 20132 / Karen Lovely Celebrates Release of Speakeasy Blues At Jimmy Mak’s – A... 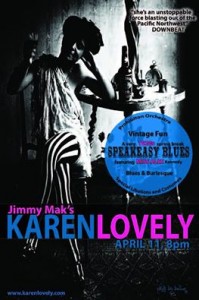 Over the past year, Karen Lovely has presented a number of performances based on the music of the early female blues legends of the 1920s-30s. These shows have been highly popular and often she has been asked whether there was a recording available of this music. So she has decided to release a new CD titled Speakeasy Blues, recorded over two nights at Jimmy Mak’s with Karen’s Prohibition Orchestra. Many of the songs collected here were originally written during the time when booze was illegal and speakeasies were alive and well. Quite often there were little hidden innuendoes  in the lyrics and sometimes not so hidden. But it was these early female artists who were the first heroes of the blues and they had a strong influence on the way that Karen Lovely performs as well.

To celebrate the release of Speakeasy Blues, Karen Lovely & The Prohibition Orchestra will be returning to the scene of the original crime, Jimmy Mak’s, on Friday, April 11th at 8:00 pm. There will be burlesque dancers and prohibition era drinks available, and a costume contest for those who show up dressed in Roarin’ 20s period outfits.

Jimmy Mak’s is located at 221 NW 10th and advance tickets are available through Tickettomato.com. $15.00 for guaranteed reserved seating and $12.00 for general admission. Cascade Blues Association members may receive a $1.00 discount for this co-sponsored show, by using the code “CBA” when ordering on-line or by showing your membership card at the door.