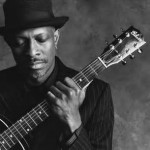 Since releasing his self-titled album in 1994, that garnered him wide-spread acclaim and a WC Handy Award (now known as the Blues Music Awards) as Best Artist Debut, Keb’ Mo’ has built a reputation as one of the finest musicians and songwriters of his generation. Two decades later, Keb’ Mo’ continues to enthrall audiences and have awards reaped upon him, including three Grammy Awards. His music is heard in countless television shows and movies and he has performed on some of the largest stages around the world, including a recent performance at The White House for the president.

Touring in support of his most recent recording The Reflection, Keb’ Mo’ will be returning to Portland for a night at The Aladdin Theater on Wednesday, April 30th for an 8:00 pm performance. Tickets are $42.00 – $59.00 and available at Ticketfly.com. Minors under 21 are permitted when accompanied by a parent or guardian. The Aladdin Theater is located at 3017 SE Milwaukie Ave. Keb’ Mo’ has always been a favorite touring artist in Portland, so plan on purchasing your tickets early as this one will definitely sell-out.