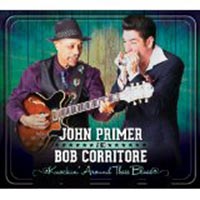 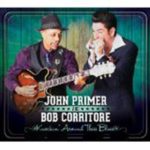 Knockin’ Around These Blues
Delta Groove

When it comes to traditional Chicago style blues, pairing John Primer and Bob Corritore is a natural fit. The kind of match that Louis Jordan would’ve said goes together like beans and cornbread.

John Primer is a legendary guitarist on The Windy City scene, having cut his teeth behind the likes of Muddy Waters and Magic Slim; as well as building his own illustrious solo career. If you’re looking for one of the deepest, down in the alley blues guitar heroes, you need look no further than John Primer.

And although Bob Corritore may have spent the past three decades in Phoenix, make no mistake, this man was raised in Chicago and knows more than just a thing or two about delivering the greasy goodness of his hometown’s sound on the harmonica.

Knockin’ Around These Blues is a long time coming disc featuring these two masters together for the first time in a studio setting. There is no question they’ve obviously stood side by side on stage throughout the years, thrilling audiences with their satisfying interactions. So putting that magic together in something you can take home and enjoy eternally is a true blessing.

Most of the tracks found on this album are covers from the blues world’s best. Songwriters like Willie Dixon, Little Walter, Jimmy Reed, Lightnin’ Hopkins and Robert Lockwood Jr. But these numbers are not necessarily always the most-known and often overplayed selections from those greats. And when thrown into the hands of Primer and Corritore, you just do not care who wrote them anyway, because they come out alive and kickin’, gonna make you say “oh yeah!”

Delta Groove always has the know-how to combine their musicians with the absolute best artists to back them. Nothing different here, either. How can you argue with a stable of side-musicians that offer Billy Flynn and Chris James on guitars; Bob Stroger and Patrick Rynn on bass; Kenny “Beedy Eyes” Smith and Brian Fahey on drums; plus Barrelhouse Chuck on keys?

Chicago blues are certainly jumping with Knockin’ Around These Blues. It is a superb collection of that classical blues sound. Really hoping that this pairing develops into a partnership churning out more discs together. Very appetizing indeed!

The Clock / Blue And Lonesome / When I Get Lonely / Cairo Blues / Leanin’ Tree / Harmonica Joyride / Little Boy Blue . Just Like I Treat You / Man Or Mouse / Going Back Home