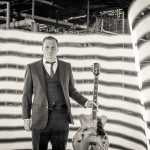 Bay Area guitarist and vocalist Kyle Jester will be bringing his interpretations of West Coast blues to Portland for three nights in June. This is high-paced music that blends traditional blues with early rock & roll — all served with a helping of swing. He recently released a terrific album, After All This, recorded at Kid Andersen’s Greaseland Studios in San Jose. This album was produced by The Paladins’ Thomas Yearsley and Jester was backed by some of California’s tightest blues musicians. Apart from his own outstanding solo projects, Jester spent a number of years with the Freddie Brooks Band and as bandleader for the Candye Kane Band and has worked with Earl Thomas.