After All This
Self Produced

West Coast Guitar player Kyle Jester has certainly made his mark over the past fifteen-plus years working with a number of renowned artists in California. From 1999 to 2001 he fronted a power trio 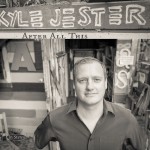 called The Tri-Tones alongside former Paladins drummer Thomas Yearsley. The band played consistently around the San Diego area and even spent a few months backing Earl Thomas on tour and on an album called The Elector Studio Sessions. Following his time with The Tri-Tones, Jester took on the guitar position in another popular Southern California outfit, The Freddie Brooks Band and then spent several years touring the world as bandleader for the Candye Kane Band. In 2004 he recorded an album as the self-named Kyle Jester Blues Band, titled Ain’t No Way, receiving high praise from many blues reviewers.

Nowadays, Kyle Jester is located in the San Francisco Bay Area where he is once again performing with a power blues trio. This last fall he went to Kid Andersen’s Greaseland Studios in San Jose and laid down fourteen tracks for a new release titled After All This. Joining Jester in the studio were Bay Area stalwarts Sid Morris on keys, Aki Kumar on harmonica, drummer Brian “Nucci” Cantrell and Kid Andersen taking on the bass.

This disc is filled with good time West Coast blues, with plenty of great jump numbers. Mostly a collection of cover songs, Jester did compose a couple tracks, including the title song “After All This” and the “Big Fat Wallet.” The covers include fine renditions of songs like the O.V. Wright classic “Ace Of Spades,” Professor Longhair’s “Hadacol Boogie,” Snooks Eaglin’s “Drive It Home” and Jerry McCain’s “Turn Your Damper Down.”

After All This is an album that will have your toes tappin’ from start to finish, especially if you love that high-paced West Coast energy. There is a lot to like about this album, it’s got great vocals, songwriting and instrumentation. But most of all, it’s just an outright fun listen that’ll keep drawing you back again and again.