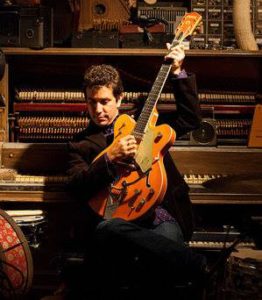 From his debut as a jazz-influenced, blues-based artist to his evolution into a pop music iconoclast, singer-songwriter A.J. Croce has traveled a circuitous musical road. The son of legendary singer-songwriter Jim Croce, A.J.’s career began with at age eighteen opening for B.B. King. In the span of a twenty-plus-year career, A.J. has headlined festivals, concerts, and major listening venues worldwide. He has performed on shows including Jay Leno, David Letterman, Conan O’Brien, Austin City Limits, Good Morning America, E!, and CNN, and he has shared the stage with an innumerable list of eclectic artists from Willie Nelson to Ray Charles, Bela Fleck to James Brown, Lyle Lovett to Morphine, and Rod Stewart to Ben Harper. An ivory-searing New Orleans piano style established an essential juju, but his exploratory pop gems revealed a spectrum of influences from art rock to Americana and beyond. As the late Allen Toussaint described Croce: “It is a pleasure to witness triple uniqueness: pianist, songwriter, singer and at such a level. Who does he sound like? The answer is himself: AJ Croce.”

On Monday, August 1, A.J. Croce will be appearing at The Lake Theater & Café, 106 N State Street in Lake Oswego. Tickets for this 7:00 pm show are $20.00 and are available in advance through the venue’s website, Laketheatercafe.com.