Land Of The Living
Self Produced 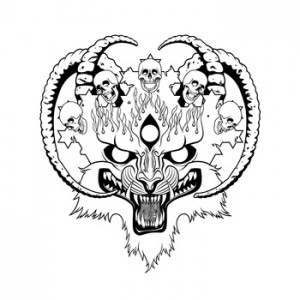 From the opening chords of the distorted guitar and into the pounding heavy pace of the opening track, “Lonely Tonight,” you know that this is not going to be your standard traditional blues music. It is more a blend of metal and blues, with perhaps a little touch of a gangsta rap approach just for a touch of enhancement as described by band leader Kivett Bednar. But when everything is said and done, when you’re finished going through Land of the Living, there is no denying its blues base.

The brain-child of guitarist/songwriter Bednar, who is originally from Austin and a graduate of Berklee College of Music, who has been living in Portland since 2012, Land Of The Living is deep and dark music that follows some of the basic guidelines for the blues, such as good love gone bad. Partnered with drummer Anthony Pausic, they follow patterns already explored by guitar-drum duos like the Cedric Burnside Project or Hillstomp. But the uniqueness of this pairing is the merge between metal music and the blues. And if that seems like a frightening prospect to you, just give Land of the Living a listen. The two genres meld together better than you may imagine and with this release the blues takes the upper hand in the overall feel.

The songwriting is outstanding. There are quite emotional lyrics underscoring some of these tracks who can bring across emotions on numbers like “I Been Loving You” or “Say It With A Grin.” And the guitar work is on fire, such as on “Highlife & Hydro,” a barn-burning blues rocker, and again on slide for “OG” that almost comes across as a take of “Rolling And Tumbling” done on speed. The recording closes with “Pedicab Blues,” the most traditional blues number offered and again is highlighted by Bednar’s superb guitar playing and strong vocals and Pausic’s driving drum beat.

Land Of The Living carries blues music into a direction that just may appeal to younger audiences or those looking for a new flavor within the genre. It is an exciting and innovative approach that really is not as far-reached a concept as you may imagine. Land Of The Living has been released as a limited run on red vinyl that is exclusively available only at Portland’s Music Millennium. For those unable to play vinyl, the recording may be downloaded at KivettBednar.bandcamp.com.

Jimmy Mak’s Invites You To A Valentine’s Day Tribute to Romantic Soul... The Healers
Scroll to top