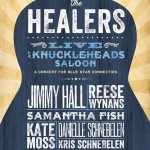 year ago now. It has been something I have wanted to hear for a long time and finally the longing became unbearable and I broke down and made the purchase on-line. After all, what is not appealing about a live performance featuring luminaries like former Wet Willie frontman Jimmy Hall, former Stevie Ray Vaughan keyboardist Reese Wynans, Trampled Under Foot’s Danielle and Kris Schnebelen, and the double guitar mastery of Kate Moss and Samantha Fish collectively called The Healers? Put them all together in Kansas City’s famed Knuckleheads and you know you’re in for something special.

The night was recorded and released as a combo CD-DVD package, with ten numbers featured on both, then an extra two on the DVD. Jimmy Hall presides on vocals on the majority of the tracks and also blows some killer saxophone and harmonica. Of the twelve selections, all but two are all known cover tunes previously handled by the likes of Muddy Waters, Albert King, James Brown, Little Milton, Screamin’ Jay Hawkins and more. The exceptions are Danielle Schnebelen taking the lead on “Love My Baby,” a Trampled Under Foot staple, and Jimmy Hall reprising his Wet Willie classic “Keep On Smilin’.”

The CD opens and closes with Freddie King pieces, “San-H-Zay” leading things off instrumentally and Jimmy Hall and Reese Wynans tearing things up on “Goin’ Down” to finish things off. In between there are numerous highlights for certain. Danielle and Samantha Fish take strong advantage when given the opportunity to take the mic. And on the cover of James Brown’s “This Is A Man’s World,” everybody shines brightly taking the spotlight while Danielle and Jimmy exchange vocals. For a live recording in a club, the sound quality is outstanding, and so is the video.

I said earlier that this is something special, and perhaps the most special aspect of this concert and the CD-DVD packaging is that it benefits the Blue Star Connection. That group originally founded by Colorado’s Grand County Blues Society, helps to put musical instruments into the hands of medically-fragile children and young adults with cancer and other serious challenges. To date, the Blue Star Connection has reached over 100 recipients from around the country and as far as India, and has worked with 22 music therapists in childrens hospitals. In 2014, the Blue Star Connection will be honored with a Keeping The Blues Alive award from The Blues Foundation. All of the artists involved with this recording are deeply involved with the organization and such events have been held in various locations in Colorado and across the country with people like Royal Southern Brotherhood, Ana Popovic, Curtis Salgado, Paul Thorn, Austin Young and Israel’s The Ori Naftaly Band.

To read more about the Blue Star Connection, go to bluestarconnection.org.

Kivett Bednar Ramblings On My Mind- Jan 2014
Scroll to top