Long Road To Nowhere
Self Produced 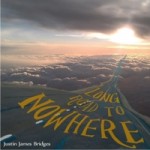 seeking reform in the treatment of the people. Think of the music of Richie Havens, singing solo armed with only an electric guitar and you’ll have a good conceptof Bridges’ music. Injured by police in the Occupy Portland movement while working as a sign language interpreter and now forced to live in a wheelchair, Long Road to Nowhere is one of three recordings he released during 2013 and it is filled with social advocacy for people’s rights and also, as on his second disc, the legalization of marijuana use.

The music is pretty basic and straight forward, influenced by the blues he heard growing up in Texas as well as the music of Jimi Hendrix and Muddy Waters. Melodic guitar lines with sharp and biting fretwork and singing, even his vocal stylings may remind you of somebody like Havens in their delivery. All selections are done completely without accompaniment, with the sole exception being “Left My Baby Down In Texas” where he is joined by vocalist Laura Ivancie.

There is no mistaking his aim in his messages, calling for people to stand up and take a stand in society in tracks like “Realize,” “Tryin’” or “Boys In Blue.” After all, he does have a personal stake behind his lyrics and those feelings have a no holds barred approach.  But it is not totally a political album. Ten original tunes that will make you think while telling his own story about his stance and his past. Soul-baring and hard-hitting, Justin James Bridges is a modern day troubadour who would’ve been at home singing in a New York or San Francisco smoke-filled coffee house of the 1960s alongside the beatniks, poets and activists of the time. But in reality, is the message any different today? Musicians have always held a position of delivering the call for reform of the times and Bridges places himself square in the middle of being the message bearer of today. A thought brought home succinctly in his lyrics to “Long Road To Nowhere”: “You can listen to me if you want to/ You know I got some stories to tell / Believe it or not, this life that I’m livin’ / It may not seem like much, but it suits me so well.”