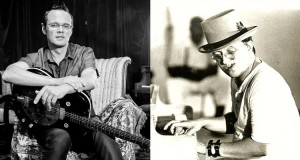 “I think we’re just a rock and roll band,” Luther Dickinson tells those who would label his North Mississippi All-Stars a blues outfit. But on his latest solo project, Blues and Ballads: A Folksinger’s Songbook Vol I &II, Dickinson exhibits an approach heavily influenced by blues and folk, but not belonging fully to either category. He’s sweetened this effort more than his usual blend of hill country drone and rock, often sounding more gospel oriented than anything he’s done to date, solo or with the band.

Whether working with his brother in the North Mississippi All-Stars, as part of The Black Crowes, or as a solo musician, Luther Dickinson is always a strong performer carrying on the family tradition set on its path by his father Jim Dickinson. Luther will be bringing his latest solo tour with The Cooperators to Portland for a night at Mississippi Studios on Monday, April 4. This is a fully seated, 21 & over show with tickets available through TicketFly.com for $20.00 advance and day of show. Show time is 8:00 pm. Opening the show will be Grammy Award winning roots musician Jim Lauderdale.