You are here: Home1 / CD Review2 / Magic Slim & The Teardrops 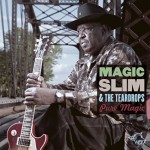 Right on the heels of the stellar recording You Can Make It If You Try! that showcases the live performances of John Primer with The Teardrops in various dates in Austria in the 1990s, Wolf Records releases a collection of the head Teardrop himself, Magic Slim from this same period. Aptly titled Pure Magic, this is a nice representation of the brilliant guitarist delivering what he did best.

Morris “Magic Slim” Holt first came to Chicago in the mid-1950s with his friend Magic Sam during a time frame that may have been the most productive for the discovery of amazing guitarists in the city as people like Magic Sam, Otis Rush, Buddy Guy and Jimmy Rogers were all coming into their own. Magic Slim would release his first recordings a few years later with his band The Teardrops with his brother Nick Holt on bass. The band would become a Chicago favorite and continuously raised the bar for blues acts over the next forty-plus years, winning countless awards including an unprecedented forty-four Blues Music Awards nominations and seven wins.

Pure Magic captures Magic Slim & The Teardrops at their best. With the tight band of the era that featured Slim accompanied by second guitarist John Primer, brother Nick on bass and Earl Howell on drums, they soar through lengthy takes on a number of well-selected covered numbers and one original. The songs may have been written by people like Albert King, Ike Turner, Willie Dixon, Little Milton or others, but in the hands of Magic Slim and his guitar they’re truly his own. This is proven time and time again on the tracks chosen here, with highlights such as “Going To California,” “I Got The Blues,” “See What You’re Doin’ to Me” and “Spider In My Stew.”

The blues world may have lost Magic Slim in 2013, but with recordings like Pure Magic we are left with a legacy of outstanding material from one of the best blues guitarists we have ever seen. Magic Slim on stage any and every time was Pure Magic and that comes across in spades on this fine disc.

The Muddy Award Night: A 2014 Spectacular Night of the Blues The Randy Oxford Band Heading To The Birk- Dec. 13th
Scroll to top