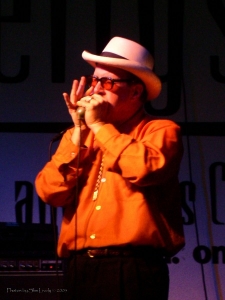 Always a must-see show whenever it comes to town, Mark Hummel’s Blues Harmonica Blow-Outs are consistently one of the best blues groupings to be found. For the past twenty-five years, Hummel has brought together the top names in harmonica to be a part of these performances, and for the silver anniversary showcase he has amassed one of the best yet!

Alongside the Blues Music Award harmonica player Mark Hummel himself the featured line-up this year will be: 82-year-old swamp legend and Blues Hall of Fame member Lazy Lester, Blues Music Award Entertainer of the Year winner and Portland’s own Curtis Salgado, rising blues star and one of the most innovative harp players around Jason Ricci, the Bay Area’s Mumbai-born harper Aki Kumar, and San Diego’s Big Jon Atkinson who is a triple threat playing not only harmonica, but guitar and drums as well. The blowers will be backed by two of the toughest, most tuneful guitarists going, Anson Funderburgh and Little Charlie Baty, while the rhythm section will be held down by California bassist RW Grigsby and legendary Texas drummer Wes Starr. Definitely a line-up for the ages and a show not to be missed!

The Blues Harmonica Blow-Out will be appearing at The Aladdin Theater in Portland on Wednesday, February 3 for an 8:00 pm show. Minors are welcome to the show when accompanied by a parent or legal guardian. Tickets are $32.50 in advance through TicketFly.com or at the Aladdin box office; $35.00 day of show at the venue.