One Step Ahead of the Blues
Icehouse Records 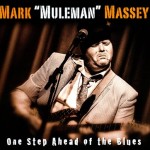 Here is another one of those discs that belongs in the category “why did it take so long to discover this one.” Mark “Muleman” Massey is a terrific songwriter, vocalist, and guitarist. And he has quite a story behind him to say the least.

Here is a man who never thought of performing music until he was imprisoned at the infamous Parchman Farm in Mississippi. While there he met bluesman David Kimbrough, the son of Junior Kimbrough, who convinced Massey to take up guitar and play in the prison band. That certainly changed his whole life and developed enough of a reputation that his name now appears on the Mississippi Blues Trail marker outside the prison alongside other musicians who served time there, including Sonny Boy Williamson and Bukka White. After serving his time, Massey met Big Jack Johnson, who helped take his career up to yet another level.

Now twenty years later, Muleman Massey released an outstanding disc titled One Step Ahead Of The Blues and to put it quite bluntly, this is one soulful, bluesy disc filled to perfection with amazing vocals and a bevy of renowned musicians. How can you possibly go wrong when you include people like Bobby Rush, Willie Clayton, Eric Gales, Garry Burnside, Billy Earheart, Reba Russell, and Barbara Blue? This recording’s lineup reads like a who’s who of the best of the South. Add to the mix the production of one of the true masters in the business, Don Nix, who also shared a number of his own compositions next to Massey’s.

One Step Ahead Of The Blues is going to convince you right out of the gate. Starting the disc with the title song featuring sharp guitar, powerful horns and Massey’s voice all blending in a driving sound ready to draw you in. That’s followed with the first of many great soulful numbers included, “She’s Not Mine Anymore,” coming across with a delivery that can easily rival any of the finest Southern soul singers of the past several decades. That is repeated over and again on the disc, with numbers like “Waiting On The Help To Arrive,” “Silly Crazy” and “Addicted To You.” And Massey reminds you of how tremendous a guitarist he is also on tracks like “Blue Shoes”  and “In The Hole” that has a church-like feel compounded by the use of Hammond. There is plenty of humor behind the tune “She’s Hongry” with Bobby Rush on harmonica and sharing vocals as they tell you about the girl who eats so much that her legs are getting weaker, but her jaws are getting strong — great imagery and lyrics. The album closes with the beautiful and touching ballad “Sun Goes Down In Memphis.”

Mark “Muleman” Massey’s One Step Ahead Of The Blues is a nice reminder that there is a lot of discs out there that may have slipped by, but when you do discover them will make you believe you’ve found your lucky day. This one is a keeper for certain. Great soulful blues by an artist I will be watching out for now on.

One Step Ahead Of The Blues / She’s Not Mine Anymore / Plastic Flowers / In The Hole / Waiting On The Help To Arrive / Silly Crazy / Blind, Crippled And Crazy / Double Trouble / I Want To Sing / She’s Hongry / Addicted To You / Blues Shoes / Sun Going Down In Memphis

New Music To Note: Dec. 2015 Justus Reece to Represent the CBA at The Blues Foundation’s International...
Scroll to top