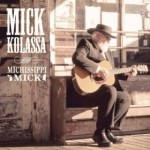 Michissippi Mick is like a personal love letter to the music of Memphis. Mick Kolassa has taken favorites from songs of the past, adding his own touch to them alongside several standout original tracks, making this album one of the best feel good recordings so far this year. And he has brought along a stellar cast of many of the region’s most beloved musicians to help him out. Recorded at Ardent Studios with the keen ear of Jeff Jensen and Adam Hill behind the mix, Kolassa has taken aim at various stylings of the blues and hit them square on the head with every track.

Opening with the old jug band standard “Beale Street Blues” updated as “New Beale Street Blues” Kolassa offers a picture postcard of Beale naming off a number of the clubs while his steady acoustic playing is matched by Eric Hughes’ harmonica. That is followed by the original “Blues Are All Around You,” offering searing guitar work by Jeff Jensen who shines throughout the disc with some of the finest string work he has ever laid to disc. The Box Tops’ rock classic “The Letter” is set to a slower blues pace with exceptional over the top organ playing by Chris Stephenson. Other numbers include a terrific take of Johnny Mercer’s “Blues In The Night” with more organ work joined by Brandon Santini on harmonica and trumpeter Dedrick Davis who has played with the likes of Barbara Blue, The Gales Brothers and Charlie Wood. The slow blues “Baby’s Got Another Lover” again finds Jensen playing guitar at the top of his game. The cover of “Reefer Man” has Victor Wainwright laying out some honky tonk piano and Kolassa closes the disc with a country yodel on Jimmie Rodgers’ “Mississippi River Blues.” There is no low point to the entire album, every song works perfectly and flows into the next as if they were always meant to be. And Kolassa’s vocals fit them all to a tee.

Besides being a terrific collection of music, Michissippi Mick is also a great way to help out with The Blues Foundation’s Hart Fund to provide aid for musicians and their families with health care needs and burial expenses, and also the Generation Blues program offering scholarships to young artists under the age of  twenty-one. 100 % of all sales will go to The Blues Foundation for both of these programs.

Michissippi Mick is a superb album that displays the love for the blues and the musical talents of Mick Kolassa. It’s hard not to enjoy this one, fun from beginning to end. Highly recommended.