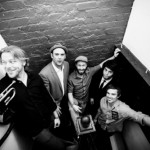 The California Honeydrops don’t just play music — they throw parties. Drawing on diverse musical influences, from Bay Area R&B, funk, Southern soul, Delta blues, and New Orleans second-line, the Honeydrops bring vibrant energy and infectious dance-party vibes to their live shows. With five albums and Blues Music Award nominations under their belts, they’ve taken the party all over the world: to Europe and Australia, featured festival performances at events like the Waterfront Blues Festival, Monterey Jazz, and the Legendary Rhythm & Blues Cruise. Plus they’ve also been announced as the opening act with Bonnie Raitt for her upcoming World Tour. Whether in those high-profile performances or in more intimate venues where the band itself can leave the stage and get down on the dance floor, the California Honeydrops’ shared vision and purpose remain: to make the audience dance and sing. Add to the mix the inclusion of Portland’s own New Orleans connection, Chuk Barber, and you know that the rhythmic pulsations are going to hit another notch of potency.

The California Honeydrops will be heading back to Portland for two nights at Mississippi Studios, 3939 N Mississippi Avenue on Friday, December 18 and Saturday, December 19. Showtime each night is 9:00 pm. This is a 21 and over only show. Tickets are available through www.TicketFly.com, $17.00 advance or at the door day of show for $20.00.