You are here: Home1 / Cascade Blues Note2 / Mitch Kashmar’s harmonica playing will blow you away 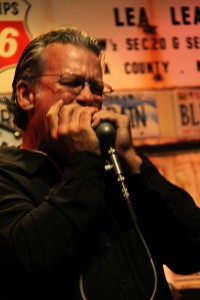 The rebel side of Mitch Kashmar started in high school when he first started performing professionally. The underage Mitch, unbeknownst to the bar owners of the area where he grew up, would perform in their venues. “One of them, however, did know, and at that particular place I could exist ONLY on stage, in the bathroom, or outside,” Mitch said.

Originally Mitch wanted to be a piano player–some sort of cross between Otis Spann and Billy Preston. But the harmonica was his destiny. “I played with a lot of older guys, and they made sure I sang some tunes, too, even though I didn’t want to. Then I fell for THAT as well. I’m grateful to them. They knew it would be hard enough to survive, even with all the advantages you can manage, and they thought I could sing, so they MADE me.”

Mitch says he always wanted to be a performer. “I fell in love with playing the piano, harmonica, vocals, and music before I was out of high school and it’s been an obsession ever since. Performing wasn’t what the attraction was, it was the sounds—the music itself.”

“The attraction to the excitement and challenge of performing came later for me, as a way to make the money to pay for the time to make more music.”

“I’ll never forget the first time I got paid for playing music. It was at Torky’s bar in Santa Barbara, I must’ve been 18. We played our tunes, got buzzed on free (and illegal) drinks, full of free chili, the ‘old ladies’ flirted with us, we made six bucks and saw a guy get hit over the head with a pool cue. All on a Thursday night. Man—talk about big excitement and success!”

Big Joe Turner, Roy Gaines, Jimmy Witherspoon and more. “Getting to rehearse all afternoon with Lowell Fulson, then meet back onstage later for the ‘big show’–the value of these experiences can’t be overstated”

“Also, William Clarke was around. He hadn’t been signed to Alligator Records, yet. I lived in Venice, he lived close by in Torrance, and we became fast friends and each other’s biggest fans. I used to tag along with him to some trippy places in inner L.A. He even called me one morning and asked if I could play harp in the studio with him, Jr Watson, Richard Innes, and Fred Kaplan–that was an ego boost. That’s me, 25-year-old pip-squeak, playing harmonica on Bill’s song “Now That You’re Gone”, released posthumously a few years ago.”

“Kim Wilson and I grew up in the same town, although at different times. I didn’t know him then, but I played with guys who were friends with him and had played with him. His parents and friends were still living there so he’d be around during the holidays and time off. Gigs were set up, parties were had, and I got to listen to and jam with one of my heroes in a loose situation. These were all tremendously inspiring experiences.”

Mitch says he knew the music wouldn’t sound right, wouldn’t sound honest, and wouldn’t have the urgency, if he didn’t play for his living. He had to consider himself a pro and put himself up for scrutiny alongside the best. “I don’t think I’d recommend that to anyone. It’s extremely difficult to build any security or sense of future, (translation: make a dollah!). It can be very difficult psychologically and in other ways downright dangerous. It’s something you have to know for yourself. As Johnny Dyer says, ‘You pour your OWN trouble!’ You’re always welcome to some from Johnny’s bottle, but he won’t pour it for you,” Mitch says with a chuckle.

When asked about influences, Mitch said, “Obviously all the classic blues cats. I love straight-ahead jazz, soul music, some country, and all the different soulful sounds of America. When you travel as an American musician, you’re impacted by what a special stew of influences we have, it’s why they love OUR music around the world to a unique degree.”

“If I was stuck on the proverbial desert island and could have only one artist’s boxed set? Maybe Ray Charles, Little Walter, Big Walter, Sonny Boy, all the Chicago guys, Junior Parker, Papa Lightfoot….then there are certain guys from the next generation who I’ve learned from and have inspired me–guys like

From 2006-2011, Mitch played harmonica with today’s version of WAR, which includes one original member, keyboardist/singer Lonnie Jordan. He says that had a big influence on him, “To be there every night on the road with such a great live performer, seeing how he draws so much energy and stamina from the crowd energy and the music itself. He seemed to run and run and run without putting any miles on the tires.”

He talked about the many singers who’ve inspired him–all the great classic blues singers–Johnny Adams, Jr Parker, and Bobby Bland. I’ve always bought records by singers, people like Sam Cooke, Lou Rawls, and Tom Jones. One time, in a newspaper article, they said I played harp like Little Walter and sang like Lou Rawls–I need to find that person and hire him/her as my publicist.”

Mitch has four CD’s on Delta Groove and one self-produced from 1999. One of the Delta Groove CD’s is a re-release of the LP his band, The Pontiax, made in the 1980’s. You can find it at www.deltagrooveproductions.com or google “Mitch Kashmar.”

He says he hopes for more CD’s in the works in the future, but how exactly to sell recorded music is something that’s getting more nebulous all the time. “I really don’t know where it’s headed, neither do most of the people in the business of selling music. I’m still selling CD’s overseas, but none here in the States. I’d love to get something done in 2014.”

Mitch has been traveling a lot over the last few years, so he has several different musicians he plays with. “I’ll be in Germany this spring with a trio I’ve worked with several times; another unit of guys when I go to Finland or Norway; yet another in Brazil, where I was last August with Rod Piazza and Lynwood Slim. I moved to Portland in April 2011, and have been enjoying meeting everybody and playing pickup gigs with the best–people like Jimi Bott, Dave Kahl, Alan Hagar, Terry Robb, Kevin Selfe, Allen Markel, Jon Barber, DK Stewart, John Mazzocco, the Knuckleheads, John Neish, Dover Weinberg, Chris Carlson, Carlton Jackson, Lloyd Jones, and anybody else I’ve forgotten.”

Mitch keeps busy touring all over the world, but keep an eye out for his local gigs–then go out and listen. Mitch urges people to get out–“Music is good medicine!”

Bring Your Sweetie (not required) and Dance Shoes to The Lehrer for the CBA’s... Jim Miller, Portland Loses One Of Its Closest Friends In The Music Communit...
Scroll to top