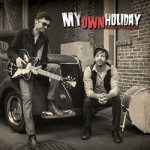 There is an amazing world full of new music derived directly out of the blues. Whether it is categorized as blues, Americana, roots or indie music, new musicians are approaching this music tastefully and honestly. It does not necessarily follow the standard I-IV-V progression, but has emerged from younger musicians who have grown up listening to various styles of modern music but still acquiring an affinity with the blues as well. It makes for an interesting and exciting blend.

My Own Holiday is a California-based duet using the bare-boned basics of Joey Chrisman on guitar and Nick Bartolo on drums. Obviously they’re going to be compared with other such pairings like The White Stripes or The Black Keys because of the full crunch sound they derive from heavy backbeats and driving guitar. But My Own Holiday takes their music into their own realm. Their recent release, Reason to Bleed, doesn’t always live on the hard edge; it also plays with sounds that could cross over into popular radio or even approach folk music. And the songwriting is outstanding.

The opening cut, “Hold On Me” is dark and foreboding, with a hard driving guitar and pounding drums that ensnare you from the offset. Then, on “Razorblades” Chrisman lays it out in the open about those untruthful people whom he’d rather chew on razorblades than listen to — it’s a brilliant visual image and cuts right to the bone. They sing praise of the musical contributions of “Memphis” and they offer acoustic mastery on tracks like the country tinged “Right Back Where I Started.” They can also get down and raunchy with “On The Floor Blues.”

This is definitely an album that so-called “blues purists” aren’t going to like. It’s not traditional by any means, but it is modern and it is authentic, true blues at its core when you give it a deep listen. My Own Holiday is taking the blues into the future making it accessible for the modern world listeners. Cutting edge music that comes at you from all directions. All good, too.

Ramblings On My Mind Journey To Memphis To Be Held Two Nights At The Lehrer : June 5th & 6t...
Scroll to top