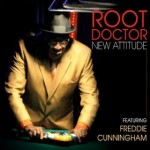 Michigan-based Root Doctor has returned with another stellar recording to help satisfy the need for soulful and rootsy blues, bringing a bit of funk and classic R&B sound to the mix. New Attitude is the band’s sixth release and all have gained high raves including a Blues Music Award nomination in 2008.

The selections on New Attitude take on multiple directions and they handle every one of them skillfully. Opening with a funky slice of guitar, harmonica and organ interchange on “Rear View Sight,” the band moves immediately into a classic 1960s New Orleans-feeling R&B piece titled “Set Me Free” and then into a Memphis soul flavored number “Bring It Back.” It shows how this band can run the gamut. Other highlights may be the Cajun inflected “Louisiana Bound” with Mike Lynch throwing down nice accordion runs, the stinging guitar and horn work on the very bluesy “The Other Way” or “Baby, You’re Bad” that once again brings across the New Orleans R&B touch bringing to mind perhaps Charles Brown or Snooks Eaglin. There is a very nice take on Denise LaSalle’s classic “Someone Else Is Steppin’ In,” one of only two songs on the disc not written by band members or their collaborators. The other is a superb take on fellow Michigan songwriter’s “Land Of The Free” that closes out the album with a nice social message for us all.

Root Doctor continues to impress me with every new release. New Attitude is a recording that should appeal to anyone who enjoys soulful blues. Pick it up just to hear Freddie Cunningham, one of the most overlooked vocalists out there who’ll convince you this man has the voice and know-how on using it. The rest of the band will prove themselves as you hear Freddie. Root Doctor needs to be heard beyond the Midwest, check them out!

Rear View Sight / Set Me Free / Bring It Back / Pay The Rent / The Other Way / Louisiana Bound / You’re Gonna Lose / Baby, You’re Bad / Someone Else Is Steppin’ In / Land Of The Free