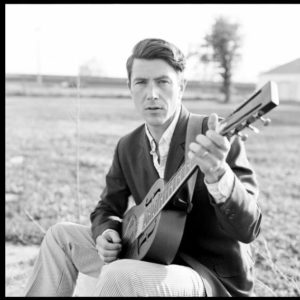 Luke Winslow-King is a New Orleans-based guitarist, singer, composer, producer, and songwriter. His work is an eclectic mix of Mississippi delta blues, folk music, traditional jazz, and roots rock & roll. His alchemical songs blend contemporary ideas with styles from bygone eras producing a sound that is rustic and urbane, elegant, and entirely his own. Like the warm tones of an old gramophone, Luke Winslow-King makes it possible for us to lose all track of time and century.  It is a sound that looks to the past to move to the future. This along with his burgundy voice, dapper attire, and versatile guitar playing have earned him a reputation as a musician who delivers soulfully energetic and dynamic performances which earned him a New Orleans Blues Artist of the Year award in 2015.

Luke Winslow-King last toured through Oregon this past and he will be returning to the state for a couple shows in early April.

On Sunday, April 2, Winslow-King will be playing at The Trillium Café in Hood River. Located at 207 Oak Street, contact the venue at 541-308-0800 for show time and admission.

On Monday, April 3, he will appear at Portland’s The White Eagle Saloon at 7:00 pm for a 21 and over show. Tickets are $8.00 in advance and can be purchased at Cascadetickets.com, or at the door day of show for $10.00. The White Eagle is located at 836 N Russell Street.

The 2017 Walla Walla Guitar Festival gets (even) LARGER!