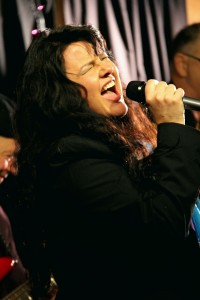 Nico Wind Cordova is a Native American who honors her heritage through her music. “I have very thick Native American roots in Montana and I am considered a song carrier among my tribe. I also sing traditional and contemporary native songs.”

In addition to native music, Nico describes her music as founded in blues, folk, jazz, soul, funk, and rock–not necessarily in that order. “Today I would be considered Indy blues or adult contemporary. I’m pretty diverse since I worked in top 40 a lot. My original music could play alongside with anyone from Bonnie Raitt to Aretha Franklin, Otis Redding to Amos Lee, to Native American artists, Ulali.”

Nico said she always wanted to perform. “I had the bug pretty bad, but I also loved animals and always had them in my life. I thought I would become a veterinarian before I would ever become a musician. Fate had her way with me because I didn’t choose the music path, music just came to me and fell in my lap. I got paid for my first performance on stage at age nine.”

Currently music is her full time job. “I have worked several different jobs throughout my career as a way to stay on my path as an artist, but not for any real longevity. I had my own Karaoke retail business that was very successful. I worked for North Clackamas School district as a bus driver for five years–that was fun.

She sings and plays guitar with a little percussion and flute. When discussing musical training, Nico says she’s like a sponge picking up stuff from people she has met along the way. “I did have formal voice lessons in Seattle with George Peckham. He taught me about breathing and thinking the notes.”

Nico was born March 20, 1960, in Portsmouth, Virginia–her father was in the Navy. Two years later her mother left her father and they moved to Lake Oswego to live with her maternal grandfather, who was an Episcopal clergyman. They lived there until her mom became a full time student at Portland State University. “I went to several schools but most of my grade school education was at Metropolitan Learning Center. For high school I attended John Quincy Adams in Portland. I finished my education on my reservation in Fort Belknap area Montana,” Nico said.

“My mom (Anne Morin) graduated with honors and became a high school English teacher for Portland Public Schools. She accomplished raising me as a single parent, working part time jobs, and with no real help from family until her sister, my Aunt Lucy, moved out here with us in 1966 to help with parenting and making ends meet. My Aunt Lucy was a classical guitarist who had studied under Segovia in New York. She was my greatest influence as a musician.”

“I was surrounded by college students as a kid so I was hanging out with people a lot older than me. PSU had a good music department. Some of the people who gave me my first chances on stage included Upepo, Oregon, The Holy Modal Rounders, Carl Smith, Pleasure, then later Paul Delay, Jim Mesi, Curtis Salgado. I opened as a solo act for Ray Charles in the 1981 tour out of Seattle. He and some of his band members were the biggest influence on me.”

Nico won 2nd place in the 2nd annual Portland Music Association Song Writers Contest with her song “Purely Sexual.” She said, “They deemed it ‘latex rock’ because it was about safe sex and using condoms.”

She has a CD out called Feather To Fly By, but it’s an old one and she’s not sure you can even find it anymore. She has also worked on a project with Ed Neumann and the Chameleons. She sang back up with Lily Wilde for DK Stewart’s title track Don’t Call Home album. She also wrote the theme song for NPRs Wisdom Of The Elders radio program and Discovering Our Story TV.

Nico is working on a CD project with a trio, Full Circle, (which includes Gordon Hermanson and Ray Davis). They hope to have a release later this year.

According to her website, “Nico always tries to honor the spirituality of her culture with her music. She believes in giving something back to the universe for the blessings and wisdom she has received as a human being. As an artist, song carrier, and animal advocate, Nico feels that our existence depends on what beauty we share and leave behind when our time here has come full circle. Nico Wind Cordova lives on the horizon and sings to the moon and stars.”

You can find some of Nico’s music at www.reverbnation.com/nicowindandfreerein. Visit her web site at www.nicowind.com.