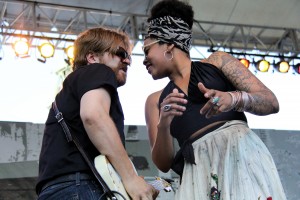 Following her highly-praised performances at this last summer’s Waterfront Blues Festival and her sold out show at Duff’s Garage back in December 2012, Nikki Hill returns to deliver more of her high octane entertainment. Those who have seen her sing her ass off agree—this isn’t just another newcomer on the scene, this is a ‘whiplash’ moment. Drawing on vintage female R&B influences such as LaVern Baker, Etta James and Ruth Brown, as well as some of her favorite male singers Otis Redding and Solomon Burke, Nikki Hill’s tough vocal style fits with contemporary sensibilities yet evokes all the great blues shouters of previous decades.

Based in St. Louis, Nikki Hill’s background in music began singing in gospel choirs at church. Along with her Blues Music Award winning guitarist husband Matt Hill, they have established themselves as roots rock, R&B powerhouses and an outstanding not to miss act.