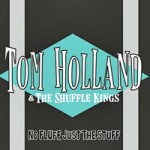 Hubert Sumlin, LV Banks and AC Reed all have in common? Well, other than being a who’s who of the Chicago blues scene for the past several decades, every one of these artists have sought out the talents of Tom Holland. The ultimate go-to guy in Chicago when it comes to filling in the needs of tasty, tuneful guitar, who somehow while seemingly playing on the road and working endlessly with others has managed to find the time to lay down original material of his own. Those aforementioned artists may be the old school of Chicago blues, but Tom Holland is standing at the head of his class for the new school sound. And it does not stray far as this young cat knows his history regarding the city’s traditional blues and aims to keep it front and center.

No Fluff, Just The Stuff is Holland’s second release with his band The Shuffle Kings. There was definitely a long gap between the two discs, about eleven years to be exact. But over the 15 years or so he has been offering his guitar work amongst the Windy City elite, he has always kept this group intact. The man knows how to keep himself busy, and that in itself is an understatement.

When it comes to traditional Chicago blues, Holland would have it no other way. He breathes and bleeds the music. All of the tracks on No Fluff, Just The Stuff are Holland originals, but there is heavy influence present throughout the songs that you can recognize the direct line from Muddy Waters, Jimmy Rogers, John Primer and without doubt James Cotton. And there is no overplayed guitar here either. He says what he needs to on the strings and nothing more. Exactly as it should be. The rhythm section of Mike Scharf on bass and Tino Cortes on drums provide the perfect backdrop for Holland’s bluesy guitar lines. And harp player Big D lays down notes that sound as if they came directly from Cotton himself, perhaps what Holland had in mind to begin with. That’s not to take anything away from Big D, an amazing harmonica player for sure! Guests on the disc include piano player Marty Sammon on four tracks and mentor John Primer on two.

Selecting highlights from this album is like telling somebody who your favorite child is; you love them all. But if I were to select a handful today, which could very well be a completely different thought tomorrow, I would point out the great opening shuffle “The Other Shoe To Drop,” the soulful “Easiest Thing I’ll Ever Do,” the Otis Rush feel in the slow blues “Hardest Part Of Loving You,” or maybe the instrumental “Hey Pardner!” where Holland sounds like he’s channeling Hubert Sumlin. This is just a flat out great album by one of today’s finest guitarists. Aptly titled, No Fluff, Just The Stuff is exactly that and I cannot say we couldn’t ask for anything more, because we do want more from Tom Holland when it comes to music like this. Outstanding? Oh yeah, and then some.

Waiting On The Other Shoe To Drop / Long Road To Tomorrow / Hurry Up & Wait / Easiest Thing I’ll Ever Do / Hey Pardner! / More Things Change / Shuffle King Boogie / Hardest Part Of Loving You / Look Here Baby / No Fluff, Just The Stuff