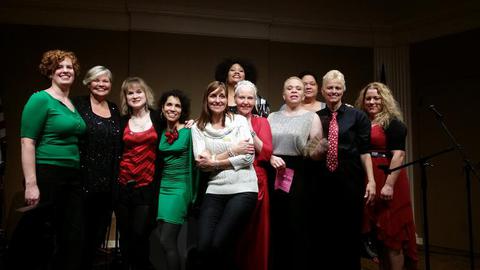 For the 18th year, Sonny Hess will be hosting two nights of the NW Women Rhythm & Blues Christmas Concerts benefiting The Candlelighters, an organization aimed at aiding children with cancer. As a cancer survivor, this is an event that means a lot to Sonny and she is bringing in many of her closest friends once again to help with the very worthy cause. This annual event always has a spectacular line-up of the most talented blues women in the region, but this year will be made even more special as they welcome special guest Claudette King to join in the holiday celebrations.

Claudette King has been called “The Queen of the Bluz.” She is the youngest daughter of perhaps the most widely recognized blues artist of all time, BB King. Claudette King can be described as dynamic, amplified, and downright sassy. She exudes a confidence that perhaps was born of her struggle to prove who she is and at the same time carve out her own identity. Inheriting her father’s gift for music, Claudette sang in glee clubs and the choir of Reverend Brown’s Baptist church growing up in the San Francisco Bay Area. “My inspiration is my dad,” says Claudette, who was also mindful of how her father was constantly on the international concert circuit as the tireless Ambassador of the Blues. Listening to the radio and her mother’s collection of record albums, she soaked up the joyous singing of notables like Aretha Franklin, Chaka Khan, Michael Jackson, and Mahalia Jackson.

King brings a nice touch to this event, but our local ladies are more than just filler; they each bring home a stage show that is energetic, soulful, and entertaining, individually filling up venues on a nightly basis. Combining the talents of Sonny Hess, Ellen Whyte, Rae Gordon, Kimberly Hall, Arietta Ward, Lady Kat, Kelly Pierce with recent Muddy Award winner LaRhonda Steele and two-time Blues Music Award winner Lisa Mann is far above any price of admission and makes these two nights not to be missed! But don’t hesitate, because they will sell out quickly!