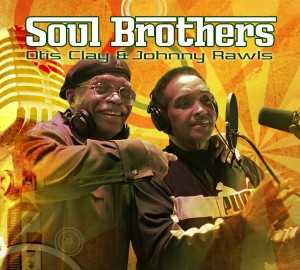 Can it get any better than teaming up two of the greatest soul-blues legends performing together? Why, yes it can. They can do an album together. And that is exactly what we have here. Soul Brothers is the new collaboration of Blues Hall of Fame member Otis Clay paired up with the incredible voice of Johnny Rawls. The two had worked together on Rawls’ previous Blues Music Award nominated tribute disc honoring his late mentor and employer O.V. Wright. And it was so good, you could only dream that they would do a full recording together.

Recorded at Sonic Ranch Studios in Tornillo, Texas, and backed by the right on target sounds of a group of established veteran musicians calling themselves The Rays, Otis and Johnny deliver on ten very pleasing tracks, alternating and blending their voices on each to perfection. New songs written by Clay, Rawls, Al Basile, Darryl Carter, Jose Hernandez and Bob Trenchard (who also provides bass on the album), and lined up against soul classics by Jimmy Ruffin (“What Becomes Of The Broken Hearted”), Tyrone Davis (“Turn Back The Hands Of Time”), Kay Kay Greenwade (“Waiting For Dreams”), and even a soulful take on a Dave Mason’s rocker (“Only You Know And I Know”). These are well known and much loved songs, but in the hands of Clay and Rawls they really come across with just a little extra that takes them over the top. Throw in new songs like “Momma Didn’t Raise No Fool,” “Road Dog,” “Poor Little Rich Girl” and “Hallelujah Lord” . . . heck, all of the tracks on this disc are standouts!

Both Otis Clay and Johnny Rawls put out some of the very best blues albums out there and have for many years. Having the two of them together is the icing on the cake. Simply put, this is soul bliss.