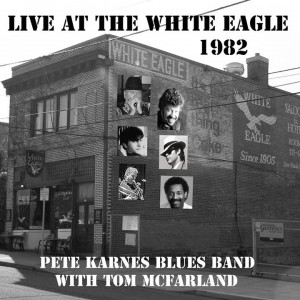 This is a throwback to the days when the White Eagle was one of the hottest spots in Portland to catch live music and particularly the blues. The Pete Karnes Blues Band was one of the primary reasons why the club was so popular, as they worked quite a number of nights as one of the house bands. The recording Live At The White Eagle 1982 takes us back to those heydays and rambunctious shows that took place in the venue and around town, with an appreciative audience on hand and a smooth blues band running through a collection of traditional blues classics and originals.

Let’s get this out in the open to begin with. The sound quality may not be up to some people’s standards, a bit muffled here and there. But this was never really meant for release. It was recorded using a cassette recorder sitting on top of a speaker during the show. Considering the clarity it did receive it’s amazing, and now thirty-two years later it has been enhanced digitally by the band’s keyboardist Mike Mendenhall for public consumption. And it easily takes you back to those party nights at the White Eagle as the band got us all up dancing the night away.

Pete Karnes harmonica playing has always been skillfully performed in the style of the Chicago masters, many of whom he had the fortune to know and work with. This is truly noticeable in the “Jimmy Reed Medley

The band really is having a fun workout during this show, with sensational saxophone on a tune like “Maonin’” from Doug Smith and the powerful solid rhythm from Richard Englund and the late Nick Christmas. Mike Mendenhall takes a terrific piano run on “Roll ‘Em Boys” and some nice organ backing on “Down At the White Eagle.” The whole band stretches out a number of times, most notably on “Chicken Shack” with various individual solos.

But what also makes Live At The White Eagle 1982 a special historical recording is the inclusion of the great, late Tom McFarland on guitar. A West Coast legend who left his mark on every blues scene from Seattle down to San Francisco and beyond, McFarland spent a great deal of time in the Portland area, delivering his always tasteful guitar playing to every project and show he was a part of. On this disc, he shares some of the vocal duties with Karnes and the two work as a collective unit between guitar and harp that it sounds as if it was written in the heavens that these two were meant to be bandmates.

For anybody wanting to relive those glory times of the blues from the early 80s or perhaps never had the opportunity to catch Pete Karnes or Tom McFarland from these days, Live At The White Eagle 1982 takes us back to time when life was a little easier and finding a seat at the White Eagle for the Pete Karnes Blues Band was just what the doctor ordered to kick off your weekend perfectly. The memories come flooding back when listening to this album. Thank you.