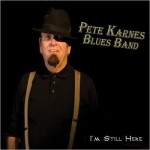 I’m Still Here is like taking a walk down memory lane, back to the 1970s and 80s when the Pete Karnes Blooz Band was one Portland’s most favored blues acts and one of the hardest working bands on the West Coast. There was no denying the band’s vision and sound of straight ahead, down and dirty traditional blues that helped spawn the city’s scene. Not only was he a top act himself, he also found a way to bring some of the best blues acts to Portland including friends like Charlie Musselwhite, JB Hutto, Robert Lockwood Jr and Big Walter Horton. Karnes released two outstanding albums during that period A shot and A Back (1975) and Dark of the Woods (1978). He also was a featured harmonica player on John Lee Hooker’s disc The Cream and his band toured opening for people like Canned Heat, BB King and the Electric Flag.

But his life took a wrong turn with his wife being diagnosed with cancer and he found himself moving to Florida for her last years and music took a back seat in his life. Working as a cross country trucker, Karnes was involved in a serious accident in Minnesota in 2004 that found him considered dead for nine minutes, then in a coma for the next five weeks and a five month stint hospitalized. Rehab was long and hard.

A couple years later Karnes found the desire to start performing again and began sitting in with acts in Florida, eventually putting together his own band again. Now, twenty-six years following his last recording, Pete Karnes has released a new disc titled I’m Still Here, a very prophetic title to say the least. It is not a return to the traditional blues for him as that never left. And that sensational harmonica work that he delivered back in the day still sounds so authentic and appealing today as much as it did then. Backed by a rock-steady band featuring guitarists Steve Shirley and Phil Koultas it is a throw-back to that blues beat derived from the streets of Chicago and the smoke-filled bars of Texas.

Of the ten selections offered on the disc, nine are Karnes originals. It opens with a churning harp piece titled “I Love My Baby” that is a driving number that shouts out you have better come to this recording to hear the blues because that’s what you’re getting here, nothing less. “Boogie Time” is a John Lee Hooker infused number that sounds like it could have come straight out of the Canned Heat discography. On “South of the Border” Karnes takes on a Latin feel that might remind you of Big Walter Horton’s take of “La Cucaracha” with its crunchy chromatic harmonica approach and some very tasty acoustic guitar from Rick Randlett. “Lil’ Jazzy” offers some trademark Karnes’ harmonica playing with that unique echoing quality that has always been hypnotic and gratifying. “Rayma’s Song” is a sad, slow-paced piece that laments on the loss of his wife to cancer and though he misses her tremendously there is still a deep love that she’ll always be a part within him every day. The lone cover number on the recording is Tampa Red’s “Play With Your Poodle,” that has a nice rocking feel behind it led by Steve Shirley’s lead guitar work.

It is certainly great to see new material from Pete Karnes; been way too long since we’ve been treated to that outstanding harmonica work and hopefully this is only the beginning of more to come. An exceptional release that finds Karnes definitely telling us all, “Hey, I’m Still Here!!”

Mick Kolassa Tommy Castro And The Painkillers
Scroll to top